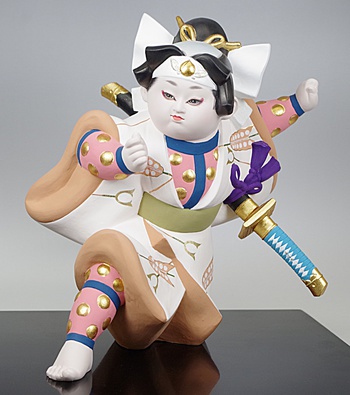 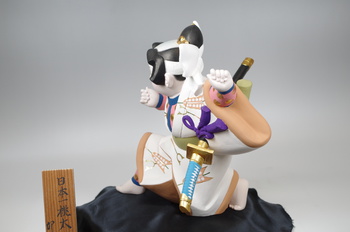 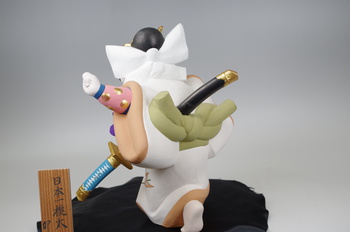 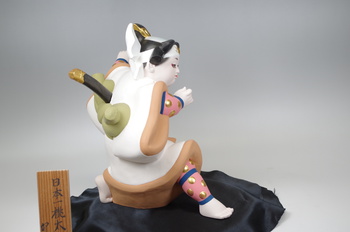 This doll`s name is Momotaro. A Japanese Hakata Doll, which are made 100% out of clay.

Momotaro is a popular hero from Japanese folklore. His name literally means Peach Taro; as Taro is a common Japanese boy's name, it is often translated as Peach Boy.

According to the present form of the tale (dating to the Edo period), Momotaro came to Earth inside a giant peach, which was found floating down a river by an old, childless woman who was washing clothes there. The woman and her husband discovered the child when they tried to open the peach to eat it. The child explained that he had been sent by Heaven to be their son. The couple named him Momotaro, from momo (peach) and taro (eldest son in the family).

Years later, Momotaro left his parents to fight a band of marauding oni (demons or ogres) on a distant island. En route, Momotaro met and befriended a talking dog, monkey, and pheasant, who agreed to help him in his quest. At the island, Momotaro and his animal friends penetrated the demons' fort and beat the band of demons into surrendering. Momotaro and his new friends returned home with the demons' plundered treasure and the demon chief as a captive. Momotaro and his family lived comfortably from then on.