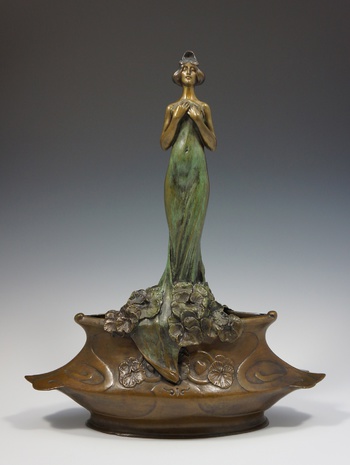 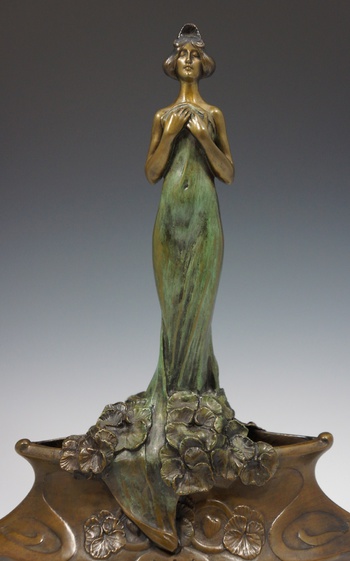 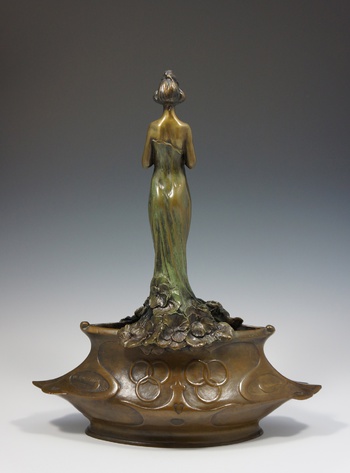 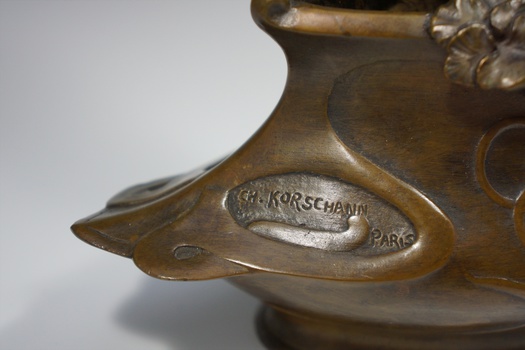 Exquisite Art Nouveau bronze centerpiece/vase by Karl (Charles) Korschann for the Louchet foundry in Paris, circa 1903-10. Korschann pours on the Symbolist design with this piece, which features a draped maiden standing among a grouping of flowers and appearing stoic in the quiet reflective pose so loved by the Symbolist artists of the period. The base has an undulating whiplash motif on the front and back, while there are additional Symbolist-type designs on the reverse (e.g., trinity of circles, heart shape, etc.). Fully signed, “Ch. Korschann - Paris,” and stamped on the reverse with the Louchet company mark. Wonderful original multicolored bronze patina with minor loss/rubbing on the high points. Dimensions: 11.75" (H) x 9.5" (W) x 3.75" (W).
-----------------
Charles Korschann (1872-1943). Born in Brno in Moravia, he attended the Fine Arts Academies in Vienna and Berlin. Although he frequently returned to Moravia, then part of the Austro-Hungarian Empire but a constituent part of Czecho-Slovakia after the First World War, he spent most of his life after 1894 in Paris. He designed many small mostly Art Nouveau subjects including vases, inkwells, clocks, lamps, wall sconces, and jardinières among those with some utility, often with full figures of elegant women, nearly always with hieratic expressions or Symbolist poses. He exhibited at the Salons of the Société des Artistes Français from 1894 to 1905, and was awarded a Bronze Medal at the 1900 Exposition Universelle. He worked with gilt and patinated bronze, bronze with polychrome glazed and unglazed ceramics, and pewter, most cast and edited by Louchet. He executed a bust of Alphonse Mucha for the museum in Brno.