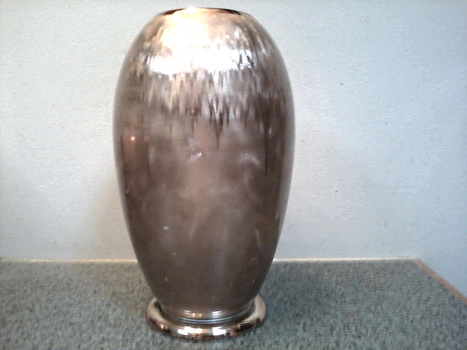 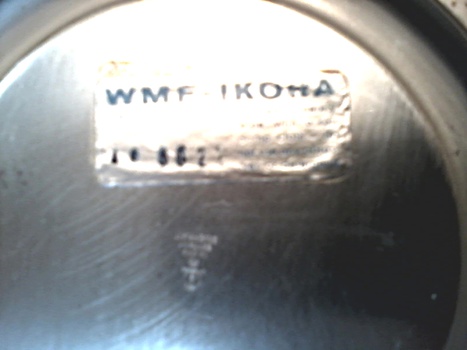 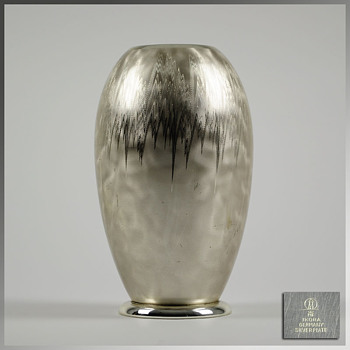 Picked this beauty out of the "waiting to shelve" cart at GW this morning. Wow, is it ever beautiful ! No dents but some tiny "milky" blemishes in the enamel finish and a tarnish spot on the shiny base. Made by WMF (Württembergische Metallwaren Fabrik) Germany. This pattern was designed for the first Ikora line in 1925 and was made in different shapes and sizes through the 50's .It can be found in their 1925 catalog. It has sort of a pinkish cast to the gold flame zig-zag finish. The original foil label is still there and the hallmark is stamped into the bottom. I think this is a later version but I'm not sure. You see the smaller Ikora pieces quite a bit but these large vases are not so common in the thrift stores. -Mike-

Note : The third picture is one that was on Ebay and had a better picture of the hallmark.

WMF (Württembergische Metallwaren Fabrik), originally founded in 1853 in Geislingen an der Steige, Germany. In 1880 there was an amalgamation of Straub & Sohn and A Ritter & Co. and the factory became famous for domestic and art metalware. The decorative pieces of WMF are highly sought after today and are prized by collectors throughout the world. WMF metal-object designers (a selection): Breuhaus de Groth, Wilhelm Wagenfeld, Gerda Conitz, Karl Wiedmann, Kurt Radtke, Richard Riemerschmid, Paul Haustein and his students Karl Kohnle, Rudolf Rieger, Karl Holzinger and Wolfgang Tumpel. Ikora Metalwork by WMF: from the 1920s to the 1960s