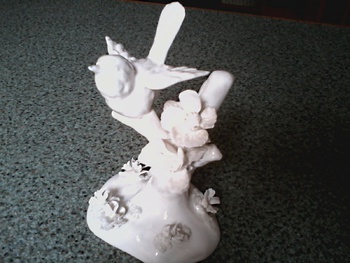 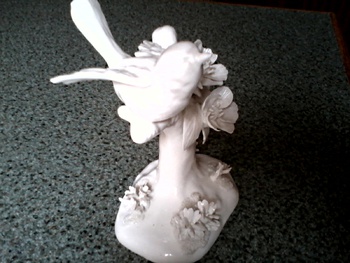 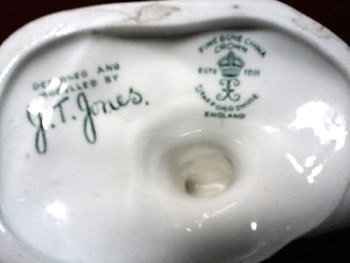 Found this tiny little 5 1/2" bone china wren figurine at GW today. It was created and modeled by J.T. Jones who did a whole line of birds for Staffordshire. This one has sustained damage to one petal on each large flower. Of all the tiny little things that can break off ( beak, wings, the teeny tiny flowers on the base) it had to be the big obvious ones. Oh well it was only four bucks (as is) so I bought it. -Mike-

Ruby Lane had this info :

J T Jones who was The Art Director at Crown Staffordshire for over thirty years. Born in 1898 Jack Jones joined Crown Staffordshire at the age of thirteen and worked for the company for forty-seven years. At the time of his death he was described as one of the leading designers of bone china table ware, but today he is probably known best for the range of bird groups that he designed for Crown Staffordshire. These ranged from large cockatoo figures to tiny wrens