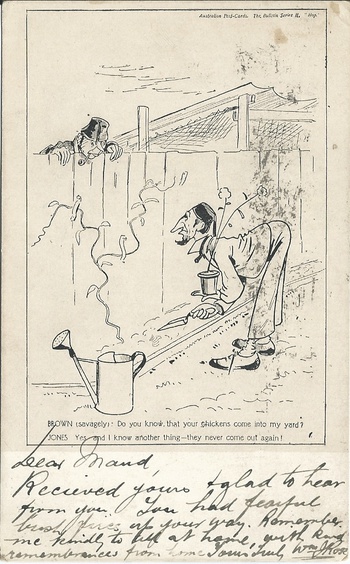 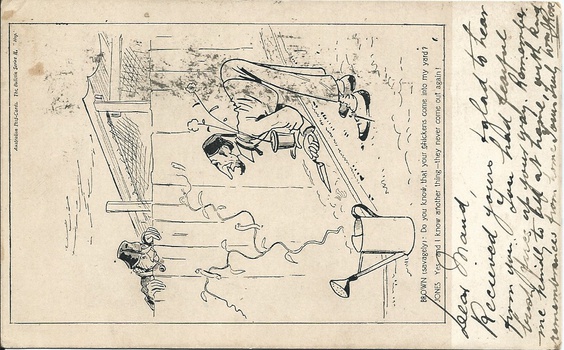 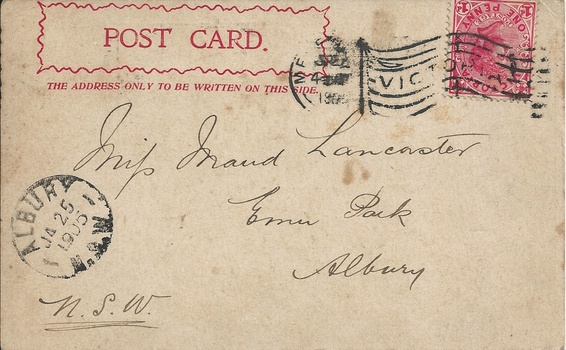 Another of the Maude Lankester Collection of Australian Postcards!

An American in Australia! This card is a cartoon card – one of a series of ten cards produced by “The Bulletin” in the early 1900’s. The artist is “Hop” aka Livingston York Yourtee Hopkins, an American cartoonist who worked here in Australia for more than 30 years.

Livingston York Yourtee Hopkins was born in Bellefontaine, Logan County, Ohio, USA in 1846. Hop fought in the American Civil War, having enlisted at the age of 17 as a private soldier (Union side) for the few months that remained. Hop began to be interested in making cartoons for a living in the early 1870s and left a country newspaper office “out west” to accept an offer made at Scribner’s Monthly (the name was afterwards changed to The Century ) in New York. He worked for the Toledo Blade and other magazines, left Scribner’s and set up his own freelance studio at 116 Nassau St and used the pseudonym 'Hop’. He contributed freelance commercial art drawings and cartoons to a wide variety of journals, including Wild Oats, Judge, New York Daily Graphic, various Harper’s magazines – Harper’s Weekly, Harper’s Magazine, Harper’s Bazaar and Harper’s Young People – and many others.

So Hop is a famed cartoonist not only here in the Land of Oz. these days on the internet there are those who believe he created the world’s first cartoon strip; however this is disputed by many. “Professor Tigwissel’s Burglar Alarm” was featured in the Graphic where “Hop” worked as its political cartoonist.

Hop had been head hunted in the US by the first editor of the Bulletin William Traill. In 1880 Traill set off to the US to try to find a cartoonist, and a piece of new-fangled technology called the “photo-engraving process”. He came back with Livingstone Hopkins, an established, tub-thumping cartoonist who had photo-engraving equipment and knew how to use it to effect. Hopkins was to stay just 3 years, but remained in Australia until his death in 1927.

The humour in this one does not translate or travel well over time. I'm still at a complete loss at to its topicality. I smell some racism however.

Description: b/w card with cartoon of two neighbors in fez!
" Brown (savagely): Do you know that your chickens came into my yard?
Jones: Yes and I know another thing – they never came out again!”

Content created
Dated 21/05/1910
The handwritten text reads:
“Dear Maud, Received(sic) yours & glad to hear from you. You had fearful bush fires up your way. Remember me kindly to all at home, with kind remembrances from home. Yours truly Wm J Rose.