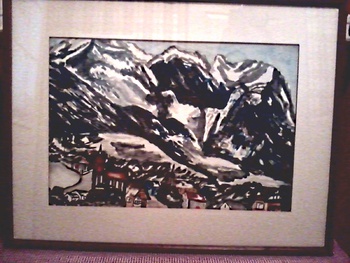 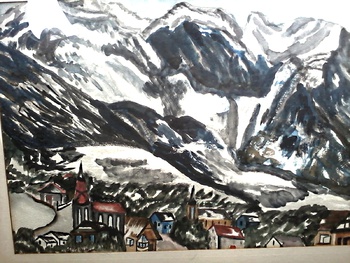 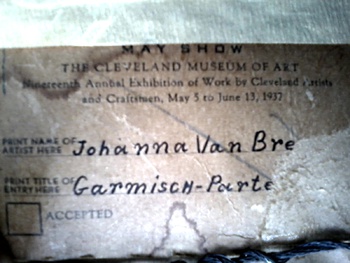 Found this at Volunteers of America today. Told you it was a good day ! A nice impressionist watercolor of Garmisch-Partenkirchen, Germany. The tag on the back says it was entered into the Cleveland Museum of Art's 19th Annual Exhibition of work by Cleveland Artists and Craftsman May show 1937. The artists name is Johanna Van Bre....... it's torn ! I had to take it apart and clean and tighten it up so I removed it from the matte. She didn't sign it ! So I couldn't find out her whole last name. If this tag hadn't been there it would have been completely anonymous. Nothing online from just the partial name. The title however was easy. The missing word is Partenkirchen. Maybe she was at the 1936 Winter Olympics in Germany and painted this when she returned home. There is a box on the tag that says "Accepted" it isn't checked. So she might not have made the cut. Poor Johanna ! She probably was crushed and never painted again. Why go though all the trouble of framing this so nicely for nothing. I bet it was shown but it's a mystery, and I love it. -Mike-

As the hyphen in its name suggests, the chic skiing resort of GARMISCH-PARTENKIRCHEN was originally not one alpine village but two, which faced each other across the Partnach stream and were united in a shotgun wedding in time for the 1936 Winter Olympics. The Games were an enormous success – so much so that the town was slated to host the 1940 Winter Games after the Japanese city of Sapporo withdrew. In the event, of course, war intervened and the 1940 Games didn't take place, but Garmisch-Partenkirchen has been on the international winter-sports map ever since, which gives the resort a relatively cosmopolitan air.