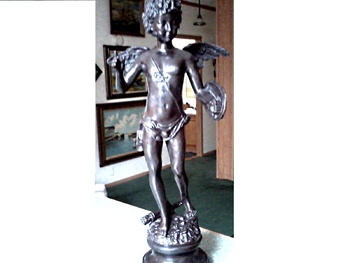 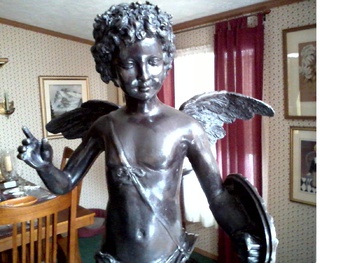 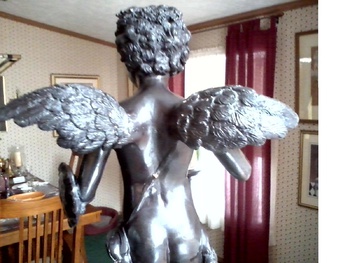 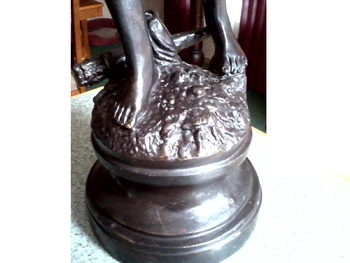 Imagine finding this at a Goodwill store ! It was sitting on the counter next to the cash register. The clerk told me the lady that donated it said it was a gift from her father, who would have been very upset if he knew she had given it away,and that it was very expensive. This cupid won't be causing any mischief because unfortunately his bow is missing. It was only attached to his back with a tiny speck of metal. It probably fell over and that was that. No more bow. I could probably make one out of something. I've seen pictures of the original and it doesn't look to complicated. He stands 24" tall 9" across the arm span and it's solid metal that weighs an incredible 20 lbs.! It has a dark patina with some gold tones showing through, but I not sure if it's bronze or spelter. It's really heavy whatever it is.There are no marks that I could find. I know it's just a decorative piece similar but not exactly like Moreau's original. but it's still awesome. It came from somewhere, I'll find out eventually. -Mike-

Found a antique website that has this exact same figure. The one they have is marked but they don't really say anything about the maker or foundry. Same height too 60 cm which is almost 24 in. They want 450EU which is $581.39 !
http://www.proantic.com/en/display.php?mode=obj&id=24989