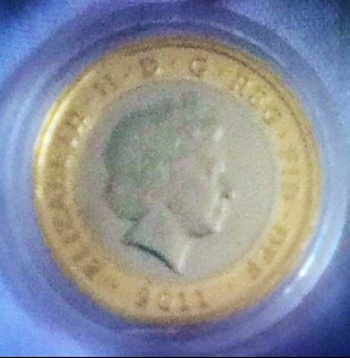 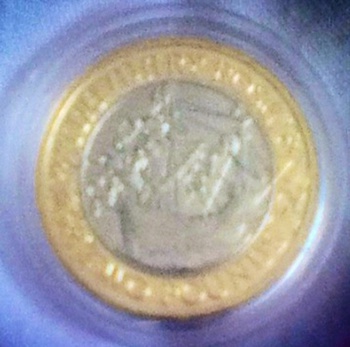 This is a 2011 commemorative coin depicting Queen Elizabeth II on the obverse and the Mary Rose ship on the subverse. The following is a detailed description of the coin from http://news.coinupdate.com/mary-rose-gold-and-silver-coins-0702/ :

"The Royal British Mint has released gold and silver versions of the base metal Mary Rose Commemorative £2 Coin, which was unveiled in December 2010. The coin marks the 500th anniversary of the maiden voyage of the 'Mary Rose,' the flagship vessel of the Royal Navy during the reign of King Henry VIII who declared the ship to be a favorite of his.

The reverse design is the work of John Bergdhal of the Royal Mint and was inspired from the only acknowledged painting of the Mary Rose, which hangs at the vessel's own dedicated museum in Portsmouth. The design depicts the carrack Tudor warship in profile, in a similar scene to the only contemporary image of this famous vessel. The numerous flags and banners can clearly be seen flowing from the tall masts with the vast armament of guns visible on both the side and aft of the galleon.
The obverse of the coin features Her Majesty Queen Elizabeth II's portrait by sculptor Ian Rank-Broadley while the edge inscription of the coin reads "YOUR NOBLEST SHIPPE 1511".
The 22 carat gold version is struck in proof quality with a weight of 15.97 grams and diameter of 28.4 mm. It has a strict mintage limit of just 1,511 pieces which corresponds to the year of launch for the Mary Rose. The sterling silver version is also struck in proof quality with a weight of 12 grams and a diameter of 28.4 mm. A piedfort issue of the silver version is also available with a weight of 24 grams and a mintage of up to 4,000 examples."