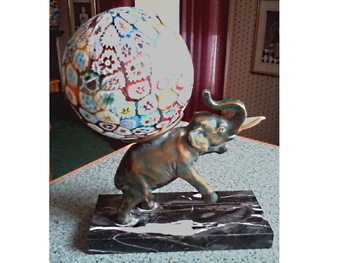 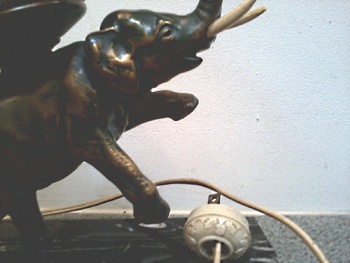 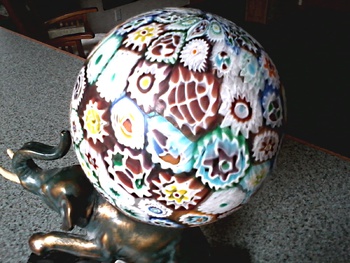 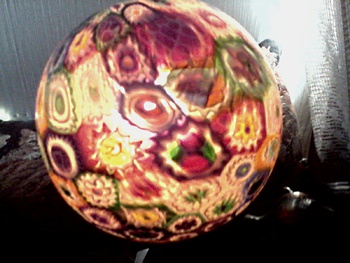 I cannot believe I found this. It was sitting on the shelf at VOA this morning right at eye level. I had seen these before online but they had mostly been the Pixie and Harlequin figures. I would have really loved to find one of those ! This one has an elephant with ivory colored tusks. Don't believe they're real ivory, feels like a composite of some kind .The shade is mounted to his back. It just pulls off to change the bulb. I don't know who made the elephant and base (no marks or labels) but the shade is Murano Millefiori. The only damage is someone cut the power cord off leaving only about 4 inches. An easy repair and I can't wait to see it once it's finished ! -Mike-

Thanks to fellow CW member Phil (PhilDavidAlexanderMorris) for pointing me in the right direction on some info about this piece.

The JB Hirsch story begins in 1907 with the New York Art Bronze Works in Manhattan’s lower east side. The founder of the company, Romanian metalsmith, Joseph B. Hirsch,
began importing pieces directly from French foundries. Around that period, foundries with close ties to the talented artists and sculptors of the Ecole des Beaux Arts in Paris, began producing their now famous works in “French Bronze.” Some of the finest talent throughout Europe trained at the Ecole des Beaux Arts, exhibiting their works at the Salon de Artistes and other great Salons in Paris, the center of the art world.

Between the wars, during the 1920s and 1930s, an entirely new modern style of decorative art emerged, using a combination of bronze and ivory. With the ban of ivory in the early 1930s, ivorine or celluloid (predecessor of plastic) was used in its place. The ivory or ivorine representing exposed flesh and the bronze or spelter representing clothing. The combination of “French Bronze” (spelter) and ivory or ivorine were fully exploited during the Deco period using events of discovery (opening of King Tut’s Tomb in the 1920s), celebrities, athletes (1936 Olympics), children, the fashions and costumes of the period by Erte and Gerdago, and dancers from the Ballet Russe, pointed me in this direction in

Found this one that sold on Ebay.