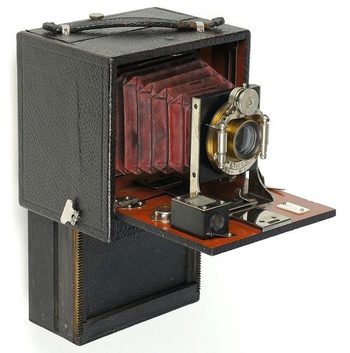 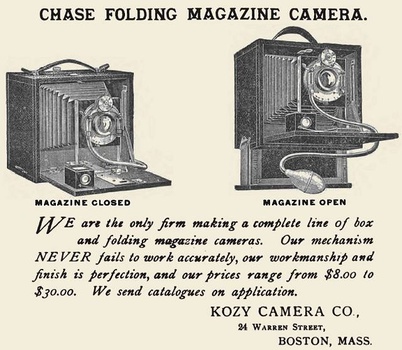 This Chase Folding Magazine Camera is somewhat obscure in the pantheon of American red-bellows self-casing cameras, having only appeared briefly from 1899 to 1901. It is fascinating because the design was an attempt to make shooting glass plates almost as easy as roll film.

Roll film had the benefit of being easy to use; just take a picture and turn a knob. Plate cameras were cumbersome. So for a very short time, some makers built and sold models with mechanically integrated ‘magazines’. Before shooting, magazines were preloaded with glass plates set into tin sheaths. Changing plates after an exposure was a little easier. However, the changing mechanisms tended to wear and break rather quickly.

Magazine cameras were sold in solid body box and folding bellows forms. There were a number of folding variations in which magazines moved in all possible directions: upwards, sideways, backwards (as seen on the Bullard Folding Magazine Camera I posted a while back), and downwards. Jacob J. Chase’s camera was a drop magazine design with rack and pinion gearing. And as the other cameras, it was clumsy to use.

This particular camera has ‘patent pending’ markings and matches the January 1900 patent (#641,268) illustrations. For whatever reason it was redesigned in 1901, yet still wasn’t successful.

Mahogany and Brass Half Plate Camer...
$21