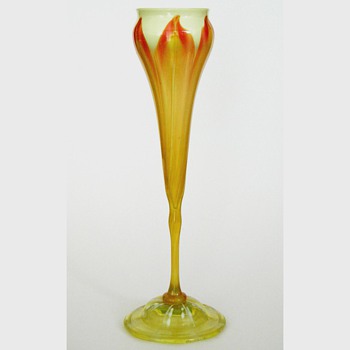 A 12-5/8 inch Tiffany flowerform vase signed "L.C.T. o7918". I was spending so much time on Loetz that I kind of lost interest in Tiffany. After twelve years of neglect, while walking through an antique show, I spotted this vase in a dealer's case, and was immediately smitten. After a bit of haggling, I brought it home. The reason I was so taken with this piece is that it had a broad red border on the feathers which gave it more of an overall red appearance. I have seen several very similar pieces, but they all had very thin red borders on the feathers and were not nearly as eyecatching. (2006)