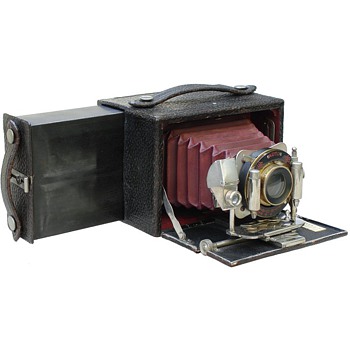 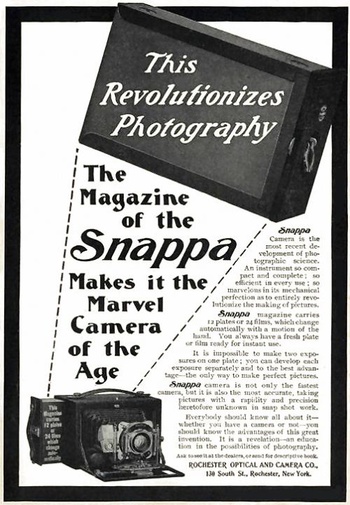 It was advertised as “The Marvel Camera of the Age,” and the Rochester Optical Company tried to simplify folding plate (self-casing) camera operations. This was because amateur photographers were burdened with loading and carrying lots of plate holders, then keeping track of which were exposed.

As noted in two of my other magazine camera posts (Chase and Bullard cameras), by the mid-1890s, self-casing magazine cameras with automated plate changing capabilities were being offered. High quality images could be produced with nearly point-and-shoot ease through the use of an automated mechanism that moved fresh plates and films into position after each successive exposure.

In 1902, the Rochester Optical and Camera Company expanded its famous Premo line with the introduction of the Snappa Camera. While there were other "magazine" cameras available, Rochester’s Snappa was heralded in advertisements as "the crowning achievement of creative genius in camera construction." From a collecting perspective, this is a rarely found, cute little camera.

The Snappa, a small camera only offered in the 3¼ x 4¼ inch format, distinguished itself by offering interchangeable magazines preloaded with either 10 glass plates or 24 sheets of film. Preparing for a new exposure was simple; pull out the telescoping part of the magazine to position a fresh plate or film. After taking a picture, the telescoping back was pushed back in. This process was repeated until all plates or films in the magazine were exposed. Surprisingly, it works reasonably well.

And for those keeping track of my two other magazine camera postings (I know there’s at least one of you out there), the Snappa is a side loading / plate changing camera. The Chase camera is a bottom magazine design while Bullard opted to go with rear plate changing mechanics.

Although advertised and marketed to "people who have avoided photography on account of its technicalities and complexities, to enjoy the rare pleasures of this fascinating art," the public must not have embraced the innovative little $25 camera. The Snappa lasted barely one year and did not appear in the Rochester Optical Company’s 1903 catalogue.