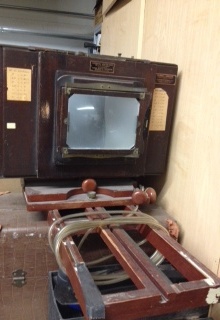 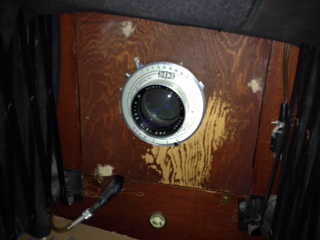 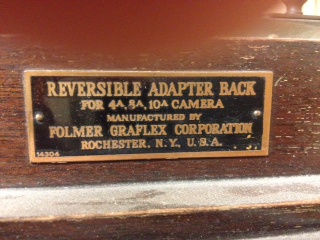 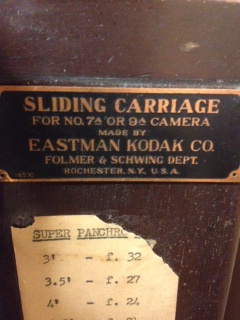 I believe this is the original Ad:

THE CAMERA. - The Camera, the No. 4 Century, is of a rather compact type of construction and will therefore probably commend itself to many photographers. provided with a Cabinet
Attachment. It is made of mahogany and cherry, put together in the best possible manner with a finish of both wood and metal work equal almost to the very highest price portrait cameras. Vertical and horizontal swings are provided, also the new rack and pinion focusing device which is an exclusive Century idea. The 8x10 Holder corresponds in finish with the camera and is fitted for either 8x10 or 5x7 plates.

Cabinet Attachment. - This Attachment is not automatic but is constructed to take the regular 5x7 Century Curtain Slide Holder such as is supplied with the Automatic Attachment. The Attachment has a ground glass at one end which after focusing may be moved and the holder placed in position to make the exposure. The holder may be used either vertically or horizontally and will also allow of making two exposures on a 5x7 plate.

The Attachment is made of mahogany highly polished and is fitted with the regular Century
Curtain Holder likewise polished to correspond.

CAMERA STAND. - The No. 4 Century Stand forms a part of the outfit. This stand is a most substantial piece of apparatus, bearing evidence of most painstaking workmanship in every particular. No part has been slighted. It is raised and lowered by a hand-wheel operating a rack and pinion and is locked automatically in position. The movement is quick and easy.

The stand rests upon three rubber tired casters and is fitted with a jack which, by a movement of the foot renders it impossible to move the outfit when the exposure is about to be made.

The stand is made of hardwood, mahogany stained, and all metal parts are oxydized. The top is supplied with the Century Automatic Tilting Device and is covered with felt. A plate holder rack is attached in a convenient position. 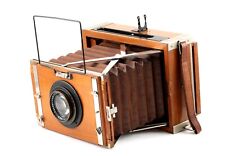