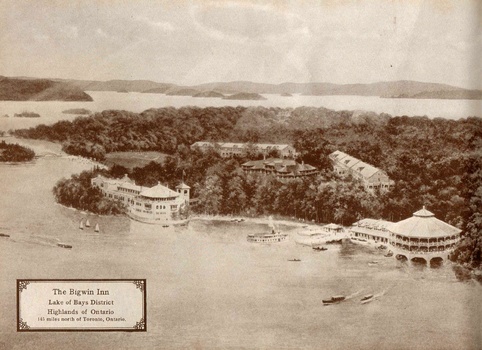 - "The Bigwin Inn" located on Bigwin Island, Ontario, Canada - circa 1917
- Printed photographic image / measures 8 1/2" wide by 6 1/4" high
** The Bigwin Inn was constructed starting 1915 and completed in 1920. With 350 guest rooms, it was one of the biggest and most beautiful resorts in Muskoka at the time. Key buildings were the Indian Head Dining Room, which could seat up to 750 guests at one time, the Dance Pavilion and the Rotunda. The first nine hole golf course on Bigwin opened in 1922. It became an 18-hole course by 1930. At its height during the 1930s many renowned musicians played at the Dance Pavilion. By then, the smaller Marine Dining Room and the less elaborate Tea House were built, along with the ferry house to store the many boats that serviced Bigwin. From 1941 to 1945 the Dutch Royal Family summered on the island when they were exiled in Ottawa. Beatrix of the Netherlands and her family lived in private cottages. The Rotunda was used to store the constitution of the Netherlands. - Bigwin Inn closed in 1966.