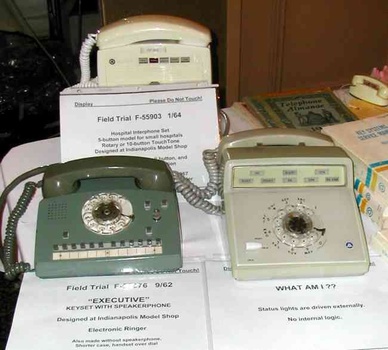 The Hospital Interphone system was field tested near Boston and went into production in the mid-1960s. The white set was a patient set used in small hospitals. It has 2 keys for directly accessing local and toll lines, which are not present in the model used in larger hospitals with PBX operators.

The Executive Keyset was tested in the field, but never produced in volume. It was also made in a model without speakerphone. The handset was placed over the dial, like a Princess set, so the set could be shorter from front to back and save desk space. I'm looking for one of those!

The third set was apparently used at a Telco operator workstation. It has no model number. There are a number of status lamps on the panel, which are wired directly to the mounting cord. They were driven by external logic. Lights indicated whether the call was dialed as "operator" or "directory assistance." The switch near the dial could put the station in idle mode when the operator was not on duty.

There are photos of many related sets on the Development Timelines pages of my site.
http://www.paul-f.com/weproto.html