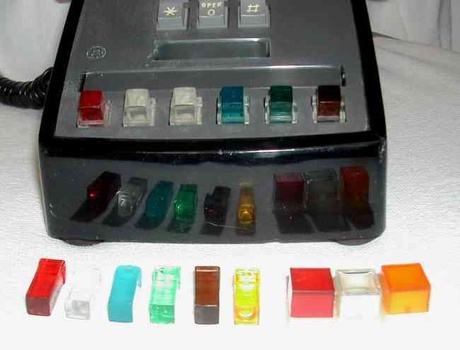 Most keysets were supplied with clear buttons, and usually a red button for the hold feature (if present). Pressing the hold button released the latching keys. Other colored buttons were occasionally used to indicate special features or to help some lines stand out for ease of use.

Here are a few loose buttons sent by Rick Gast and from parts boxes at shows.

The 2 clear buttons on the set are on latching keys for seperate lines, and the three colored keys on the right are on momentary keys for signaling. Most phones had one momentary contact signal button - typically to buzz a secretary, receptionist or members of a work group when calls needed to be transferred or a latching button for internal communication (intercom). Multiple buttons could be used for selectively signalling different individuals or groups.