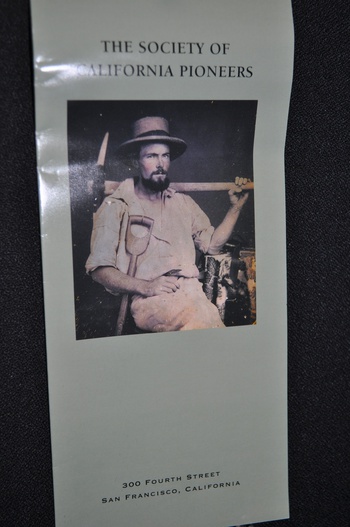 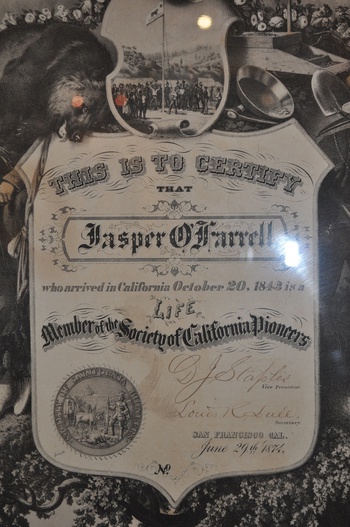 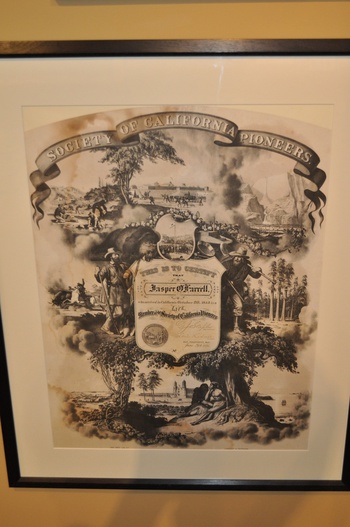 Earlier today I took a trip to The Society of California Pioneers in San Francisco, where they just opened up a new exhibit featuring items donated by families of its members. To be a member of the Society, you must have ancestry in California dating back to the Gold Rush era, aka 1850 or so. Though the society is exclusive, the museum is not, and I will post lots of Show & Tells about my time at the museum, which I highly recommend, in the next few days. The items range from clothes, to weapons, to paintings, though all are essentially from 1850-1900, with none being from after 1915.

This is Jasper O'Farrell's membership certificate welcoming him to the Society of California Pioneers, produced in 1874. O'Farrell, an Irish-native, was San Francisco' first surveyor. He is credited with designing Market Street (which I'm not sure he deserves "credit" for, given the traffic it creates), and O'Farrell Street (as well as a number of California pubs) is named for him.

I would have included a picture of the building that the museum resides in, but it was nothing spectacular, so this is your introduction... I hope you enjoy!