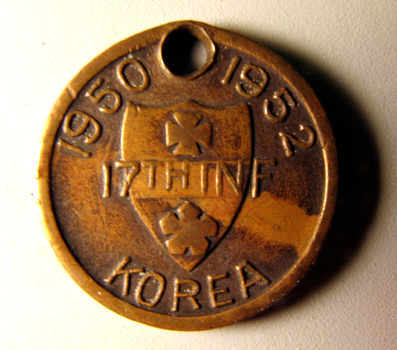 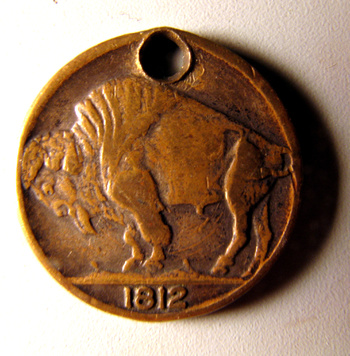 My oldest Military Challenge Coin in my procession. I originally acquired this coin in an Ebay Auction.

One side has a standing Buffalo similar to the one found on a Buffalo nickle. The date "1812" represents the first time a 17th Infantry Regiment was activated.

The other side along the top edge is the dates 1950-1952. In the center has "17th Inf" over the 17th Infantry Regiment Distinguished Unit Insignia (aka a Unit Crest). Along the bottom edge has the word "Korea".

The dates represent the years the regiment has been in Korea. The regiment first arrived in Sept 1950 (Inchon Landing). the second year is the year the coin was minted.

The Regiment Crest was changed in 1952, when the Buffalo was added to it. Starting in 1953, this challenge would reflect this change. It would continued to be issued to around the early 1960's when it was stopped being issued.