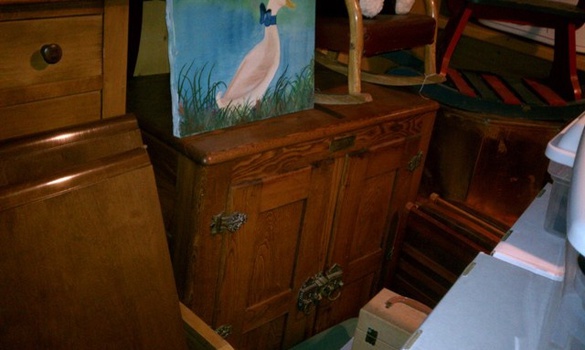 My parents bought this in the 1970s. It says Brushaber on the plaque. I think it's an ice box from the 1900s or 1910s. I love it. I think it's beautiful. I used to store all my music in there when I took piano and violin when I was younger. It's always been in my life.

Upon more digging I found it was made in Detroit Michigan by J Brushaber Sons. Founded around 1871 and grew to become one of the largest enterprises in Detroit. I just needed to dig deeper! William and Charles Brushaber really brought the company into its hay day and they expanded to two locations. I found this in a exerpt from The City of Detroit 1701-1922:

WILLIAM BRUSHABER. Detroit has been called a dynamic city. Its growth has been so rapid as to appear marvelous, and yet there are within its borders many enterprises of long standing, which have given a most substantial character to the business activity and development of Detroit. Such is that conducted by J. Brushaber Sons, whose house was founded in 1871, and has continued a most important factor in connection with the furniture trade of the city. Throughout his business life William Brushaber has been identified with this undertaking, and is now the secretary and treasurer of the company. Detroit numbers him among her native sons, his birth having here occurred August 14, 1877, his parents being John and Mathilda (Hamburg) Brushaber, the latter also a native of Detroit. The former was of European birth, but came to Detroit in early youth, and was here reared and married. He later established business that ultimately developed into the house now conducted under the name of J. Brushaber Sons. This business was established on a small scale in 1871, the store being opened on Woodward avenue, between Columbia and Elizabeth streets. Mr. Brushaber conducted the business until his death, which occurred in 1902 when he was fifty-three years of age. The mother survives him and is yet a resident of Detroit. In their family were two sons: Charles, who is the president of the J. Brushaber Sons company; and William, of this review.

Thank you to Jim Brushaber of Colorado who helped lead me on the path. I probably know more about your family history then you do!