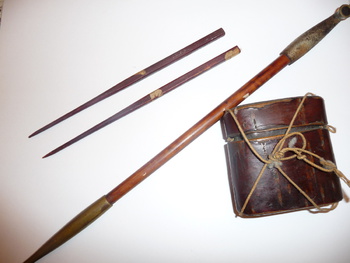 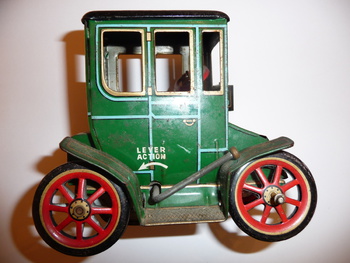 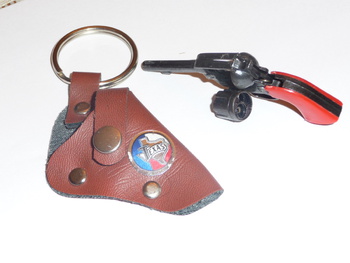 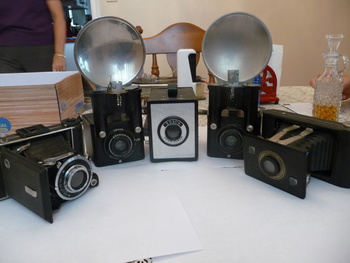 The first picture is of antique chopsticks and an odd pipe with case that my father brought back from his military travels in Japan and the Philippines after World War II. The pipe has a small bowl and is 13" long. The case could hold some sort of substance. The chopsticks are 6 3/4 inches long. There are no markings on neither the pipe and case, nor the chopsticks.

The second picture is of an antique Model T(?) The sign says that "lever action" and the back says "Trademark Modern Toys." It was made in Japan, patent number 104210.

The toy gun is tiny. It's a Victory toy gun. It's a working model of an old handgun with working trigger handle and such. The case has a tiny Texas emblem. The gun itself is only about 2 and 3/4 inches in length.

The cameras are diverse. Two are Brownies Flash Six-20 with flash included. Another camera is an Ansco Shur-Flash from Binghampton, New York. There is also a Jiffy Kodak Series II by Eastman Kodak Company in Rochester, New York. The last camera has an indistinguishable name starting with what looks like a B or an R and ending in what looks like an X or a K..[XFOCL]? (it looks to be covered in leather). This camera has a a Meyer Gorlitz Mr. 970163 Trioplan lens.