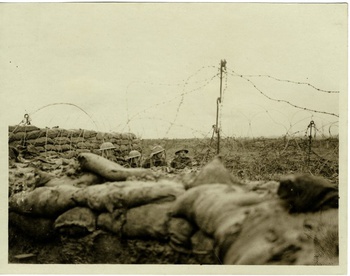 Dull picture with (I think) an interesting back story. This is a picket used to string barbed wire entanglements, famously used in WWI, but also in WWII. A bar could be pushed through one of the loops to screw it into the ground, and then the barbed wire could be strung through the loops. The photo shows an example of use.

A few years after the 10th Mountain Division was re-activated at Ft Drum, New York, I was part of a group from the 7th Infantry Division (Light) from Fort Ord, California to travel to NY to evaluate a 10th Div exercise. At one remote location on Ft Drum, soldiers digging a defensive perimeter kept hitting these twisty pieces of iron a few inches under the sod, and they had no idea what they were. There were hundreds of them all along a berm. It was clear to me that someone else chose this position many decades ago and strung barbed wire defenses. The barbed wire was long gone, and successive years had buried most of the pickets under the ground, and the bit that was poking up was hidden under brush. I explained what they were, and with the group of soldiers looking at me like I was nuts, I tossed a couple of the best looking pickets in the back of my Humvee. Later, I wrapped these approximately five foot long rusted iron pickets up in brown paper and managed to convince the officer in command to let me take them back with me. At this point, most of the members of my group thought I was nuts too, but I managed to get the pickets all the way across the country courtesy of the US military.

A bit of research shows that in 1935, the area had been used for what was then the largest military exercise in American history. I’ll never know if my pickets were part of that exercise, but it’s fun to imagine soldiers putting up obstacles that another generation of soldiers would encounter over 55 years later.