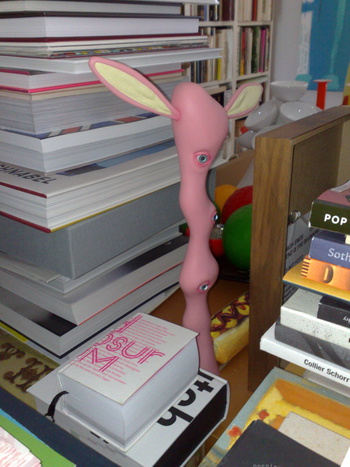 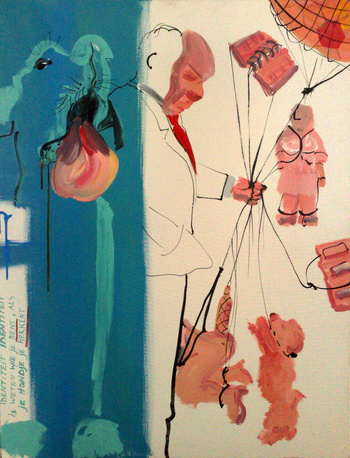 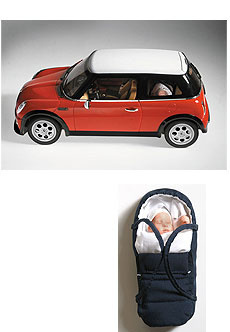 In between the books, some other artworks and glass you see the pink object with the bunny ears.
It’s Mark Ryden’s “YHWH”, a vinyl figure created after the central figure in Ryden's painting of the same name. (See the photograph above) The figure is cast in pink vinyl with inset eyes and comes in an elaborately designed embossed box.

The painting at the right of the bookcase is an oil on canvas by the Dutch artist David Bade. Titled (more or less): "Identity is knowing who you are if your dog recognize you"

On the Floor underneath the painting a glimpse of the object 'Forgotten Baby (Mini Cooper - Red)' by the Scandinavian artists Michael Elmgreen and Ingar Dragset.

This is a 1:6 scale replica of the Mini Cooper used in the artist's 2005 installation/project 'Forgotten Baby' at the Wrong Gallery in New York. The Elmgreen and Dragset Wrong Gallery project 'Forgotten Baby' was to park an Austin Mini Cooper with a bundled wax baby in the rear seat in a car bed unattended for a week. The car received numerous traffic tickets and drew public attention. This 1:6 scale version is a replica of that 2005 event.

In front of the bookcase on the floor some special Taschen editions, as Jeff Koons’numbered and signed “KOONS”; the wonderfull Norman Mailer, “MoonFire: The Epic Journey of Apollo 11” edition. Each copy includes a Plexiglas-framed, numbered photograph, signed by Buzz Aldrin. This shot of Buzz Aldrin standing on the Moon, with fellow astronaut Neil Armstrong reflected in his helmet's visor, is the definitive image of the Apollo 11 mission, and one of the most famous and iconic photos ever taken. There are some more of these Taschen books in my book collection as the Martin Kippenberger, Olafur Eliasson and Christopher Wool editions.