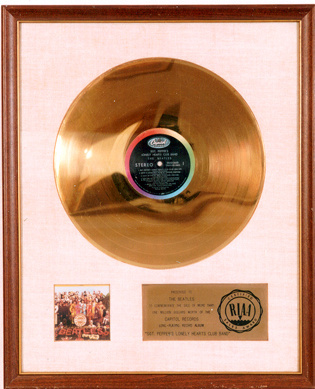 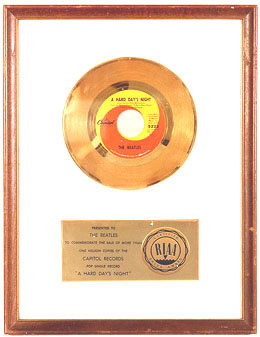 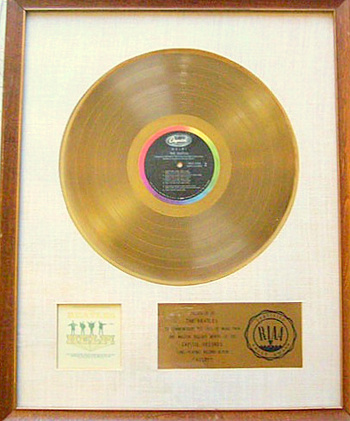 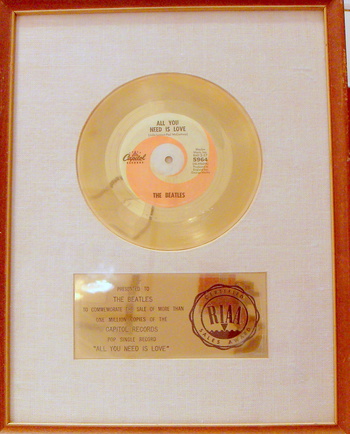 "SGT PEPPER" is considered the "Holy Grail" of award collectors. While
it is the most sought after, the award that is most rare is "THE BEATLES SECOND ALBUM" "PEPPER" HAS A CURRENT VALUE OF $17-$20,000.

The RIAA 45 award is a "coin" single for "HARD DAYS NIGHT". THE BEATLES had only three coin singles, "I WANT TO HOLD","CAN'T BUY ME LOVE" and "HDN". There were three formats for white matte 45
awards,small play hole,large play hole and the most rare the "coin" single.

"HELP" RIAA award,while the band had made two great movies,sadly
"HDN" was never certified by the RIAA. The label and U.A. seemed to
have not agreed on many things,money being much of it I'm sure. This
is a classic award.

"ALL YOU NEED IS LOVE" The band had three singles certified in 1967.
"HELLO GOODBYE", "PENNY LANE"and "ALL YOU NEED"