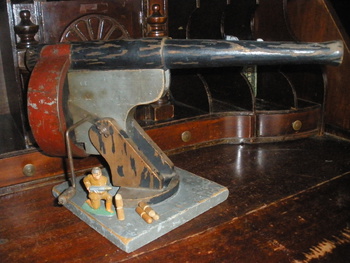 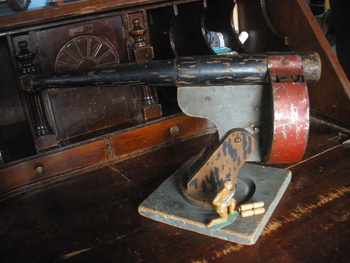 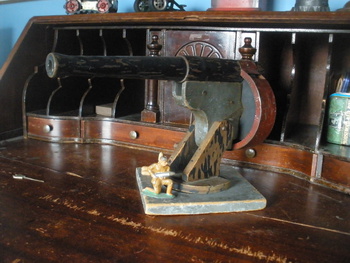 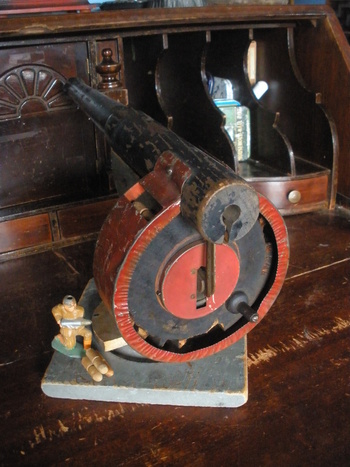 This is one of my favorite pieces. I'm not certain if this was a one off handmade piece or an actual manufactured toy. All the same, I've never seen another one. I'm not even certain if this is depression era (although the folk art vibe is undeniable). It could be much earlier than I can guess.

This holds 16 projectiles in the drum at the back. Each is loaded though a slot on the top (non-crank) side. The drum is spring loaded so as you pull back the hammer (that giant vertical metal piece on the back) via the crank, the drum easily slides to the next round.

Most cannons I see are propelled by the end of a wire spring that is pulled and released to "smack" the projectile forward. Simple, but effective. That isn't the case for this this monster. It DOES NOT play around. It has an actual "r" shaped hammer made out of 1/16" steel that strikes the projectile. The spring attached to it is a 1/16" wire coil spring about 3-4" long (inside the curved wood area under the barrel). I swear this thing has recoil, or at least I think it does since I need to put both hands on it to fire it!

Toy or not, I would not want to be in front of this thing when it goes off. I don't have a room big enough in the house to shoot it from one side and not have it hit the wall on the other side (and I mean top-middle of the wall), and I've tried in a 20' foot room. I've yet to take it outside for a real test, I only have 4 little bullets and I don't want to loose them.

I have a few broken Barclay soldiers, so I like to attribute their untimely end to this cannon!