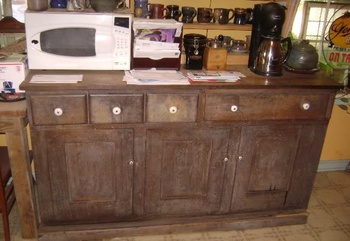 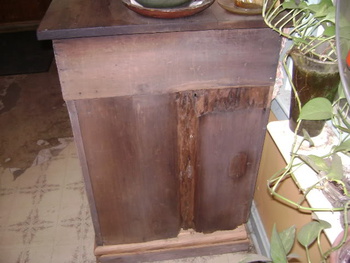 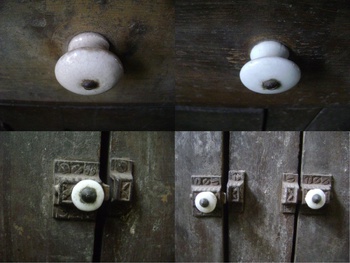 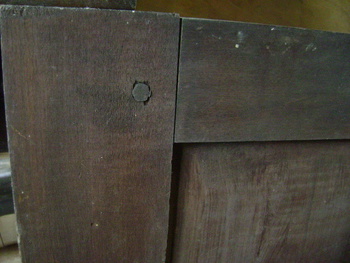 I acquired this piece a number of years ago when I responded to an ad for a free table in a nearby town in Southern Indiana. The table was in sad shape but I took it anyway. The woman had bought this grand old house built in 1885 from a 95 year old woman & was in the process of clearing it out & rehabbing it. I ended up hauling away several loads of scrap metal, various old lumber, odds & ends that she didn't want to deal with. We uncovered this in her 1910 garage piled high with junk. Once we had cleared out the bulk of the rest of the junk she said that I might as well take this old converted dry-sink too, since it was one less project than she needed to deal with.

I was thrilled although it did have it's problems. It leaned back & to one side because termites had eaten the foot-board & up the right side at some point in it's life. I think it had a cabinet next to it that the water pump was mounted onto that hid the termites from view.

After airing it out in my driveway of it's musty smell from it's years of storage, I wiped it down with damp paper towels, then washing it with oil soap & scrubbing the blackened & stained top with turpentine. I fashioned a new foot-board to replace the eaten one & found it to otherwise be a solid as the day it was made. I've applied some furniture paste wax to the top & body to protect it so as not to tamper with the original finish. The top has some tacks around the edge which I'm assuming were used to hold down a cover of oil cloth.

At some point, the pan for the sink had been replaced with a drawer & the hole for the drain had been patched & a new pine top put on. While it was laying on it's back in the driveway, I noticed on the underside of the top were instructions written in pencil, complete with miss-spelled & corrected words. I think whoever wrote it, their first language wasn't English (maybe German was their first). They were instructions for the carpenter on what to do about replacing the pan with a drawer. The whole body & drawers of the piece are made of 7/8" thick poplar & the sides & shelves are one 22" wide board.

I'm guessing on the date, but believe it was original to the house. The porcelain knobs on the big drawer that replaced the pan are slightly smaller & different than the ones on the small drawers. It also has porcelain knobs on the door latches which you don't see very often. An expert on hardware could probably date it from the knobs & latches. It's one of the biggest dry-sinks I've ever seen at 66" long.

I love it & it's a very useful & practical storage piece if you don't mind it being a little cruddy & termite eaten. I have since put wheeled frame under it to make it easy to move around. I'd be interested if anyone had any further information on it.