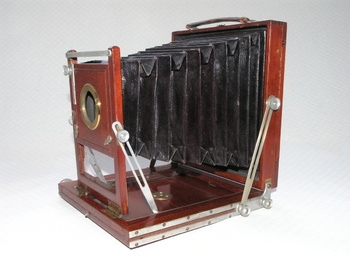 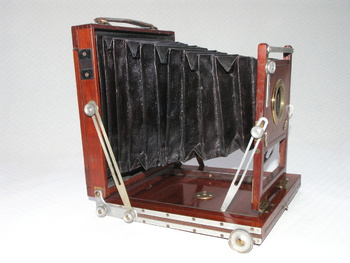 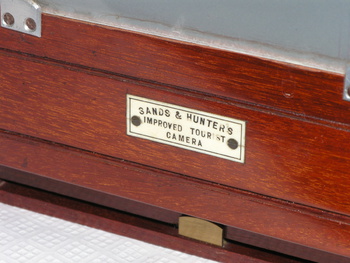 Sands & Hunter. | Improved Tourist Camera.| 1883. | Half Plate.
Catalogue No. 0210.
The company's style and title on this camera's label is "Sands & Hunter's Improved Tourist Camera". They were using "Sands & Hunter" from 1883 to 1892, when they became "Sands, Hunter & Co." A very lightweight English mahogany field camera, conventional but for Aluminium mountings instead of brass, this is one of a few "Tourist" cameras really light enough to be used by tourists. Aluminium was regarded as a precious metal until the second half of the 1800s. Its use on cameras was a fashion introduced about the early 1880s, when cheaper methods of extracting Aluminium from ores were discovered. The fad for Aluminium camera mounts did not last long, although James Lancaster was still offering them in an 1893 catalogue.