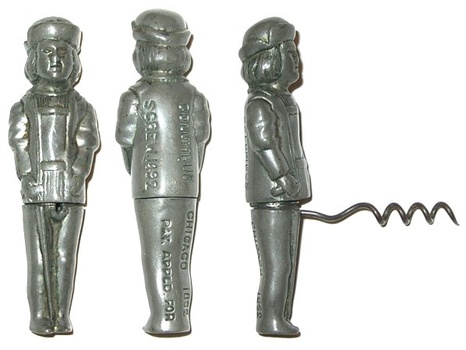 Way back in 1892, Chicago, IL hosted the “World’s Columbian Exposition”. This was to celebrate the 400th anniversary of Christipher Columbus’ discovery of the New World.

This was a HUGE event! The site was about 600 acres and about 200 buildings were built! Over 27,000,000 people attended! There were many New things featured at the fair for the first time. The Farris wheel, neon lights, Juicy Fruit gum, Quaker Oats, and Shredded Wheat to name a few. But amongst these “firsts” were many souvenirs too, and one that I like most is this corkscrew!

It’s a small figurine of Christopher Columbus. His body is hollow inside and is comprised of two pieces that screw together (like a capsule). BUT inside is a corkscrew that can fold out, and when you screw the pieces back together his body becomes the handle. How cool is that?!

I'm originally from Chicago, so I'm naturally drawn to this piece. Too bad I couldn't find one when I lived there, as I now live in the Pacific Northwest.