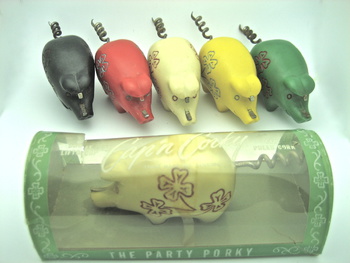 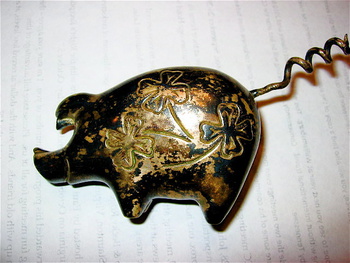 Howard L. Ross was granted an American patent on August 16, 1949 for this little piggy.

The pig is made of a hard plastic composition. His tail is a corkscrew, but his snout is a cap lifter. These pieces are often times found with cracks in the snout area from heavy use.

Now, there are 5 commonly found colors. Black, Red, Cream, Yellow, and Green. AND I was fortunate to acquire one in the original packaging! Very cool!

A fellow collector found a metal Ross pig. It is painted a dark metallic color (that I believe is blue, but unverified), but you can clearly make out the metal under the paint (where the piece is all scratched up).

And there is an urban legend that tells the story of a collector that SURELY saw a Blue Ross Pig Corkscrew and passed it up at an antique fair. The next chance he got, he returned to make the purchase, but alas the pig had gotten away.... No one else has ever seen or found this little piggy since.

I have fabricated a photo of the elusive Blue Pig in hopes of someone claiming to have it in possession.

By chance have you got one? Got a lead on where I can get it?
I'm pleading for your help!