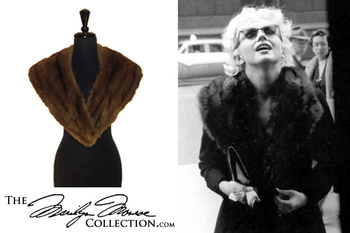 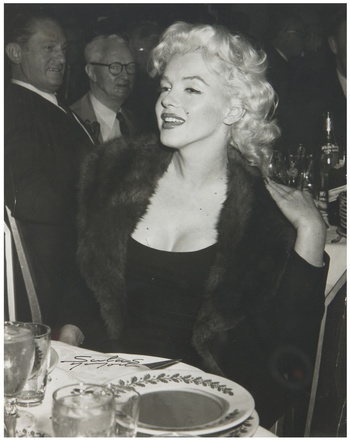 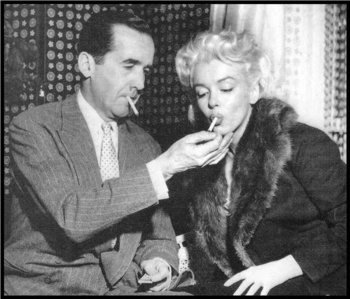 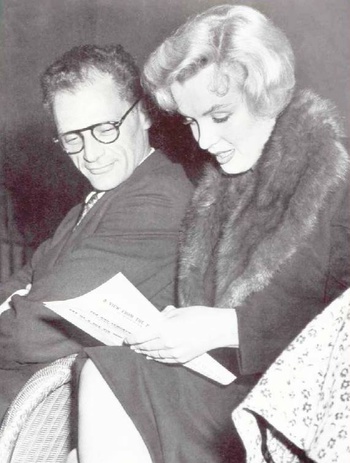 A natural mink collar with brown satin lining. An obvious favorite, Marilyn wore this fur regularly when living in New York City, and also during at least two Milton Greene photo shoots, one being the famous Edward R. Murrow session, which was shot at his home prior to Marilyn's now famous appearance on his television show. On another occasion, Marilyn was interviewed wearing this collar at Milton Greene's studio, located at 480 Lexington Avenue in New York. She's also pictured wearing the collar on several other occasions, including while off the movie set in England when filming "The Prince and The Showgirl."

An excerpt from the Book "Marilyn: The Ultimate Look at the Legend" by James Haspiel in which he describes Marilyn wearing this mink collar:

On a mild mid-morning...I was walking towards the Gladstone and as I arrived at the entrance I came upon a teenager standing outside with an 8-mm camera aimed directly at the hotel's revolving door, which was already in motion. Marilyn came awhirl through the door and literally performed a 360-degree turn for his home-movie camera. She was dressed in an elegant black suit with a fur collar, her lustrous hair shoulder length, and was fully made up. Dazzling! She was about to walk from 52nd Street and Lexington Avenue over to the fifth Avenue beauty salon of Elizabeth Arden. So I walked side by side with her; naturally, to the utter frustration of this kid who was walking backwards with his movie camera pointed at us, because I was now unavoidably in all of his wonderful footage of Marilyn. In fact, although I sought him out over the following years, he never allowed me to see the candid film he took of Marilyn and me walking across town that day.

As she walked her famous walk in her very high black stiletto heels, cars and trucks just pulled over to the curb and drivers emerged from them shouting "Marilyn! Marilyn!" When we finally got the three blocks over to Fifth Avenue, we then had to walk uptown to 54th-55th Streets. As we arrived at the doorway to Elizabeth Arden's salon, I heard the nearby sounds of an automobile crashing, and looked over to see a taxicab driver whose head was bobbing out of the passenger-side front window of his cab, the vehicle itself now embedded in the back end of a delivery truck! He had a gleeful smile on his face and was hollering, "Marilyn!" I tapped her on the shoulder and exclaimed "See what you did!" She gave me a very "Marilynesque" laugh and swept rather grandly into the salon.