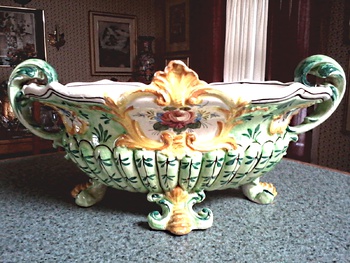 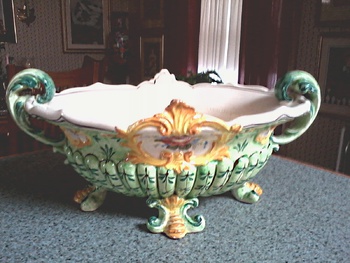 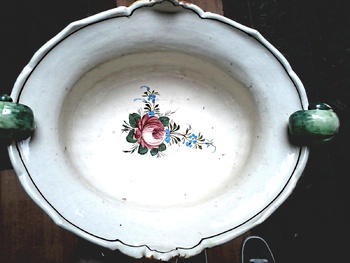 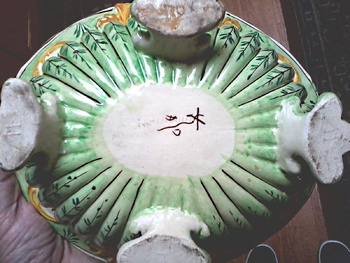 This piece was in the GW showcase this morning and I knew it was Italian majolica. After looking at it closely I had to have it. It appears to be quite old with minimal damage. Mostly light nicks and a few abrasions. No cracks and it passes the ring test with flying colors. Each foot is marked with a Roman numeral I-IV. It's 12" to each handle and 5" high. I love the ornate design and I think it's maybe late 19th early 20th century. Has a nice clear and interesting painted mark. I still haven't figured that out yet. It's also stamped in the clay underneath the mark with "Made in Italy" but it's faint and hard to read. I'll have to keep researching this gem ! The "thrifting gods " were smiling on me today. -Mike-

Now that I know what the mark is and who made it :

Agostinelli & Dal Pra of Nove, a pottery and porcelain producing center, not far from Venice. A & D was established in 1883. The studio was part of the Societa Cooperative. Domenico Agostinelli died in 1928 and the firm continued to use this mark until 1952 when Rita Dal Pra assumed management of the firm. This was one of Nove’s finest ceramics factories. The company won numerous international awards. Examples of their ceramics are highly collectible.