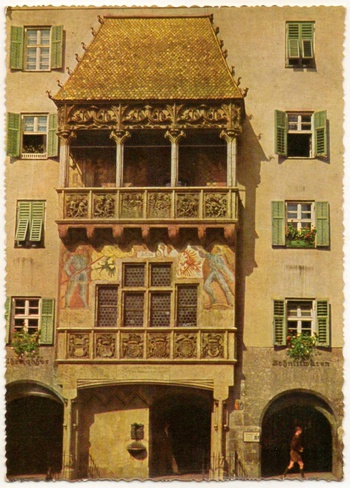 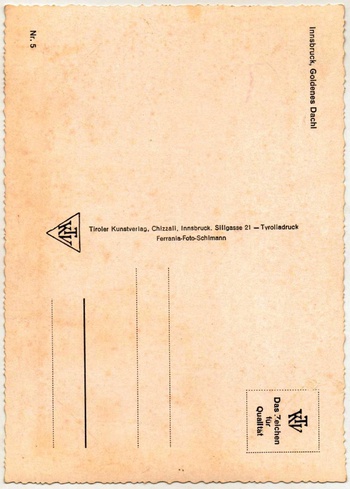 This is a postcard of Innsbruck, Goldenes Dachl - Circa 1957 - unused
** The Goldenes Dachl (Golden Roof) is a landmark structure located in the Old Town section of Innsbruck, Austria. It is considered the city's most famous symbol. Completed in 1500, the roof was decorated with 2,738 fire-gilded copper tiles for Emperor Maximilian I to mark his wedding to Bianca Maria Sforza. The Emperor and his wife used the balcony to observe festivals, tournaments, and other events that took place in the square below. The entire oriel is decorated in sculpted reliefs and mural paintings. The first-floor balustrade is adorned with eight sculpted coats of arms, six facing the square and two flanking panels, representing Maximilian's territories. Above the coats of arms are frescoes by Jörg Kölderer, painted in 1500, showing two knights bearing heraldic flags representing the Holy Roman Empire and Tyrol. The second-floor balustrade is decorated in eight sculpted reliefs, six facing the square and two flanking panels, depicting various images associated with Maximilian's life. The two central reliefs show Maximilian. The one on the left shows the Emperor with his second wife Bianca Maria Sforza on the left holding an apple, and his beloved first wife Maria of Burgundy on the right. The other central relief shows the Emperor with his court jester and his chancellor. The flanking reliefs show Moorish dancers engaged in "acrobatic and grotesque dancing"—a common form of popular entertainment of that time. The dancing shown in these outer reliefs is of Andalusian origin.The frescoes that adorn the interior of the loggia were also painted by Jörg Kölderer and show scenes from the aristocratic life of that time. All of the decorations on the current structure are carefully executed replicas. The original reliefs are on permanent display in the Tyrolean State Museum, known as the Ferdinandeum.
** Source for above - wikipedia
On the reverse is the description:
Innsbruck, Goldenes Dachl
Postcard by - Tiroler Kunstverlag, Chizzali, Innsbruck, Sillgasse 21-Tyroliadruck / Ferrania-Foto-Schimann

ANTIQUE PPC VIEW OF TRAM STATION IN...
$2
See all