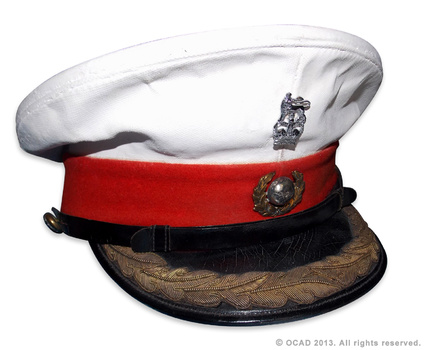 This is a British Royal Marine Officer's peak cap, with King's crown buttons dating to 1953. Commissioned in 1937, the cap's owner saw action in World War II, and was fatefully transferred from HMS Royal Oak one day before it was sank by a German U-Boat, in October 1939.

After the war the Officer continued in the Royal Marines and later become the Commanding Officer of the SBS (Special Boat Section).

This cap was worn by the ranks of Major and Lt. Colonel and would have been worn by this Officer during his time as OC of the SBS in Germany. Such RM caps with King's Crown buttons and "scrambled eggs" are unusual, and despite the fact that the cap is not named the added background information makes it all the more interesting.