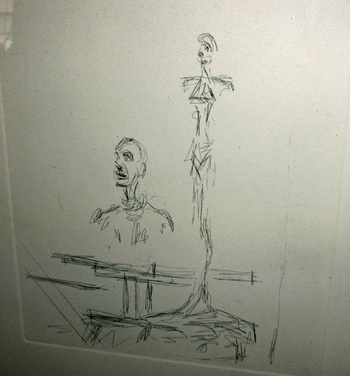 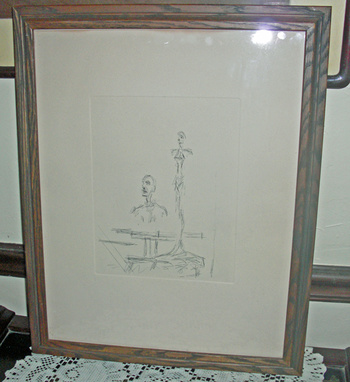 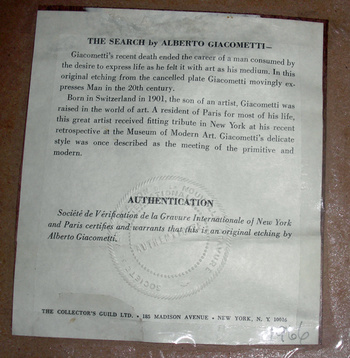 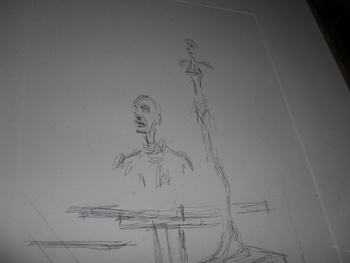 Alberto Giacometti "The Search" with original COA dated 1966 and listed it as an original when it was red flagged by the Giacometti foundation 1986 copyright claiming it's a fake and I am a fraud. Did some research on this company Collector's Guild and found litigation on the Surrealist Spanish painter Salvador Dali signed and numbered limited editions that Dali had created in the 1960s for a deluxe edition of Alice in Wonderland. Max Munn. The president of Collector's Guild, who supplied the text, contends that the prints were correctly described as originals. All art experts at the time contend that the government confiscated Dalis are not fakes. Odile Gorse, president of one of these companies, Castilton Fine Art in Manhattan, had a notebook crammed with copies of contracts between Dali and European publishers that she said authorized the production of these government confiscated prints. Dali personally signed the lithographs from his hospital bed before the re-strike and so did his daughter and both signed the contracts because Dali was gravely ill. Collector's Guild, a 21-year-old New York City firm that sold artworks at three galleries at New York and New Jersey did exist in 1966. Those Dali limited edition prints went through 20 years of litigation (paid mostly by taxpayers) and then were returned to their rightful owners for re-sale. On the Dali etchings the lawyers did not question the briefcase full of signed contracts; but the signature on blank paper before the re-strike from a hospital bed making them fakes and not inspected by Dali. The massive media coverage destroyed the integrity of the art work and the small art company called the Collector's Guild. The lawyers and government promotion of bad publicity worked and the company was closed. Would seem this Alberto Giacometti "The Search" with original COA dated 1966 also has a "fraud, fake" label on it even though contracts were signed before his death when he was gravely ill and large monetary payments by American Express and Diners Club were made to families to re-strike a limited edition of these etchings. The REAL fraud and fake is to call this garbage fine art at all? Anyone have knowledge of any litigation with the Giacometti foundation with their 1986 copyright and the 1966 re-strike by Collectors Guild? 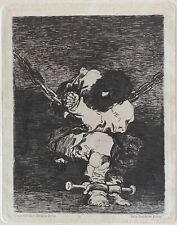 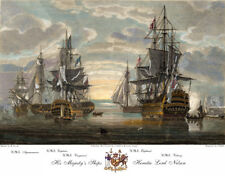 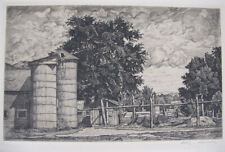 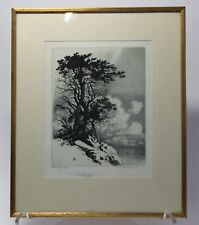