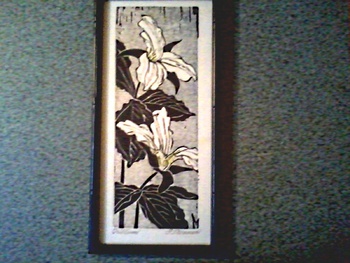 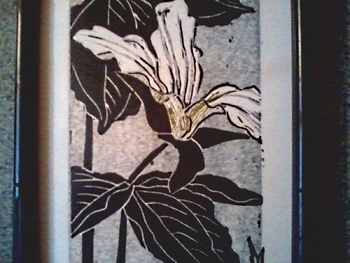 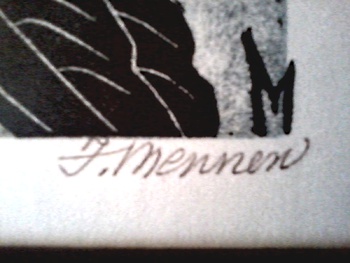 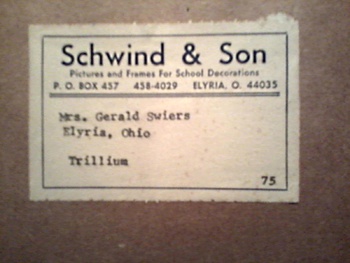 This was a surprise find from GW this morning ! A signed piece of art that is actually by a known artist which, I had no problem finding online ! It's a wood block print by Appalachian artist Fannie Rebecca Mennen. This print is called "Trillium" a native woodland flower that grows in that region of America. It's 7 " x 14" framed, and done in mostly black and white but there are touches of grey and some yellow highlights. The frame has a bamboo pattern in the wood. It's been professionally framed by a local art store where I live in Ohio. I'm not sure if they are still in business today. I'm pretty certain it's an original and not a copy. It looks like it's signed and titled in ball point pen. Why would you go through all the expense of a professional framer using non-glare glass if it wasn't important ? Seems to be dated '75 on the back label from the store. That was about the time when her "Plum Nelly Clothesline Art Shows" were held. -Mike-

Up until the early 1970s, if you found yourself surrounded by Lookout Mountain’s crisp autumn air, steaming apple cider and hot gingerbread, handmade dolls, working craftspeople and sawdust trails through the woods punctuated by the pottery of Charles Counts and the woodblock prints of Fannie Mennen, you had probably landed smack in the middle of the annual Plum Nelly Clothesline Art Show. Plum Nelly is not actually a town, but a sort of farm name. It is “Plum” out of Tennessee and “Nelly” out of Georgia. This two-acre crafts center in the New Salem community, located on a spur of Lookout Mountain, was owned by artist Fannie Mennen (1903-1995). And there she conducted her annual “clothes line” art show for 26 years starting in 1947. The Chattanooga native did not consider herself an artist until after she had taught art in schools for many years. Stricken with polio in her first year of life, Fannie’s childhood years in the early 20th century were marked by many doctor visits, surgeries and long convalesces. Despite her physical handicaps, Fannie studied music and art at Peabody College in Nashville, TN. One Christmas, she and a group of artist friends decided to make linoleum block-print holiday cards. Fascinated by the possibilities in printmaking, Fannie knew she had found her medium. For the rest of her working life she was a prolific printmaker, depicting scenes and sayings of the rural mountains. Working from a wheelchair most of the time, Fannie was known for her tireless commitment to her work and the arts community.