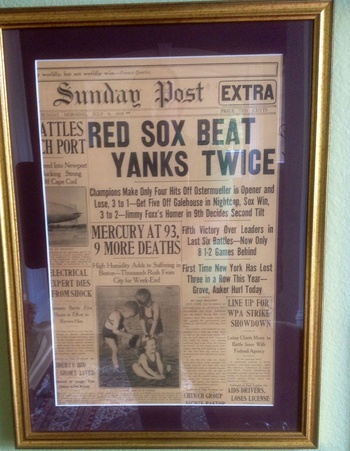 In 1912, the Red Sox finished with 104 wins and the Yankees followed 54 games behind, so there was nothing surprising about Boston’s domination. When the Red Sox came to town on July 5, 1939, however, the roles were reversed. By that point in the season, the Bronx Bombers had already amassed an 11.5 game lead over their rival and were threatening to run away from the rest of the American League. In five closely contested games, however, the Red Sox revived their pennant hopes by winning them all, including two doubleheader sweeps on consecutive days.

It looks like somebody ought to ask the American League to break up the Boston Red Sox. Their feat of whipping the New York Yankees five straight in Yankee Stadium came close to distracting everybody’s attention from tomorrow’s all-star game in New York and the reverberations are likely to last a lot longer.” – Judson Bailey, AP, July 10, 1939

As things turned out, the shockwaves of the dramatic sweep didn’t last very long. After the All Star Game, which the AL won 3-1, the Yankees rebounded to win eight of their next nine games. Before long, the division lead was back into the double digits and the three-time defending champions were on their way to yet another American League pennant. Despite ending the season with a respectable 89 wins, the Red Sox finished 17 games off the pace.