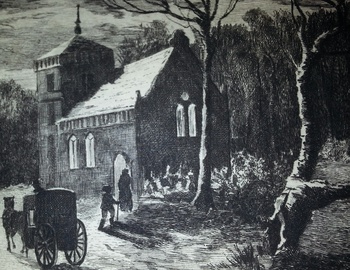 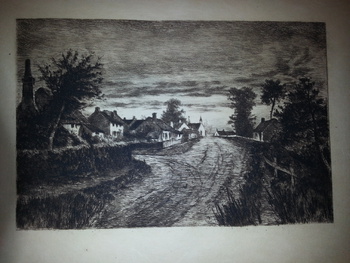 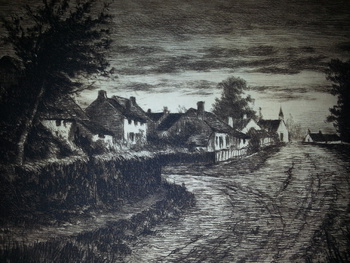 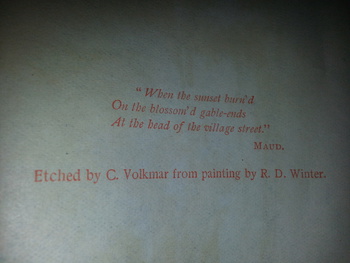 The item shown is an original etching from by the infamous Charles Volar. Thos image is an illustration from the frontispiece of the book THE WORKS OF ALFRED, LORD TENNYSON Poet Laureate vol IV, copyright, 1892 and 1895.
3 1/2 X 5 1/2 (Sizes in inches are approximate, height preceding width of plate-mark or image.)

Charles Volkmar: A nineteenth century American painter, etcher and ceramic artist, Charles Volkmar first studied art techniques at the Maryland Institute. He created his first etchings there, before turning twenty years of age. In 1861 Volkmar was accused of being a Confederate sympathizer and thus travelled to Paris. There, he first studied sculpting techniques under the famous French master, Antoine-Louis Bayre. As well, Volkmar later studied painting under the Barbizon artist, Henri Harpignies. In total, Charles Volkmar lived in Paris for a total of fifteen years and exhibited his etchings and paintings at the prestigious Paris Salon, from 1875 to 1880.
During this period Charles Volkmar became interested in pottery, particularly in relation to the underglaze slip painting process. When he returned to the United States, Charles Volkmar set up kilns at Greenpoint, Long Island (1879), the Bronx (1882), Menlo Park, New Jersey (1888) and finally, Metuchen, New Jersey (1902). Volkmar's ceramics business flourished until ill health forced him to retire in 1911.
During his career, Charles Volkmar exhibited his etchings, paintings and pottery at the National Academy of Design, the Pennsylvania Academy of Fine Arts, the Boston Art Club, the American Watercolor Society and at the Brooklyn Art Association. Today his fine art is included in such noteworthy collections as the Smithsonian Museum of American Art.
In 1883 the Art Department of the New England Manufacturers' and Mechanics' Institute, Boston, held a an important exhibition of contemporary American art. Concentrating largely upon American drawings and etchings the exhibition catalogue listed 731 works of original art. Charles Volkmar's etching is strongly printed, impression with full tonal values and in excellent condition throughout.

I welcome any and all information pertaining to this item.
Thanks for looking.