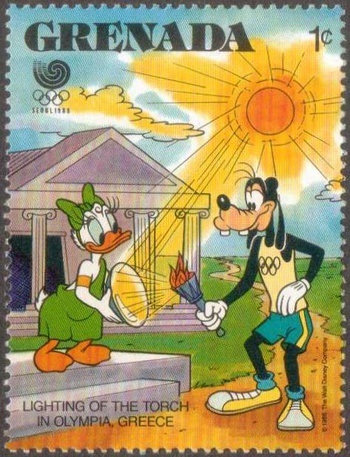 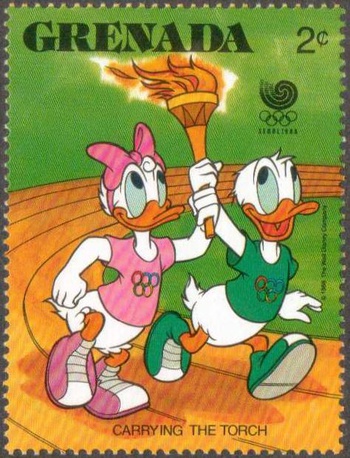 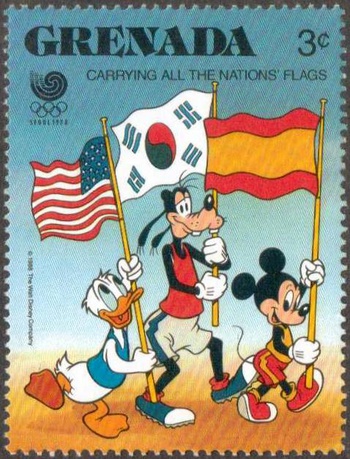 This is a 1988 series of postage stamps issued in Grenada using Disney characters to commemorate the 1988 Olympic Games in Seoul, Korea
Issue date April 13, 1988 - © 1988 Walt Disney Productions
** Collector Issues / MNH OG = Mint No Hinge, Original Gum - unused
--
--
- Scott# 1582 - (1) Cent - "Daisy Duck & Goofy / Lighting the Torch"
- Scott# 1583 - (2) Cents - "Daisy Duck & Donald Duck / Torch Bearers"
- Scott# 1584 - (3) Cents - "Donald, Goofy, & Mickey Mouse / Flag Bearers"
--
** Grenada is an island country consisting of the island of Grenada and six smaller islands at the southern end of the Grenadines in the southeastern Caribbean Sea. Grenada is located northwest of Trinidad and Tobago, northeast of Venezuela, and southwest of Saint Vincent and the Grenadines. Grenada is also known as the "Island of Spice" because of the production of nutmeg and mace crops of which Grenada is one of the world's largest exporters. Its capital is St. George's and the national bird of Grenada is the critically endangered Grenada Dove.