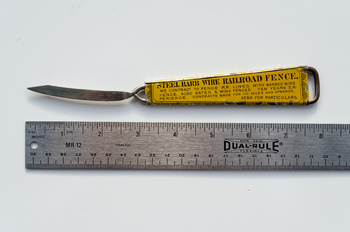 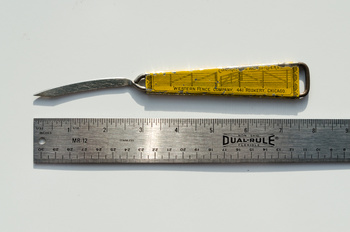 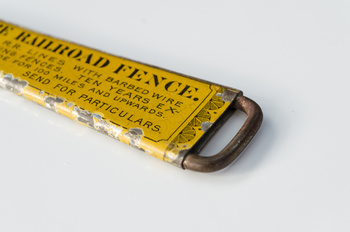 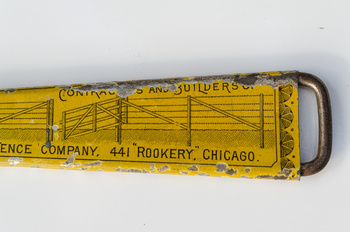 This antique letter opener has been kicking around on my desk forever. I don't know where it came from or the history but it possibly was owned by my grandfather who lived in Luverne, MN.
Can anyone educate me as to the possible history of this item. It's likely a free "gimme" letter opener advertising "Steel Barb Wire Railroad Fence".
Further down under the title it says: "We contract to fence R.R. Lines with barbed wire fence, also gates & wing fences. Ten years experience. Contracts for 100 miles and upwards. Send for particulars."

On the back side it says: "Contractors and Builders of" with an address below: Western Fence Company, 441 "Rookery", Chicago. There is also a graphic of 5 sections of fence plus one swing gate. My guess is that the yellow painted handle with the graphics are on tin. The top and bottom edges have lost some paint, including small print with the name of the manufacturer (which started with a "W").

The Rookery is a very famous building designed by Burnham & Root and completed in 1888. Read more about it here: http://therookerybuilding.com/index.html

9/2/14: More info learned: After searching for "Western Fence Company Chicago", a series of 'Builder's Directories' (basically old telephone books) revealed that the fence company was in existence since at least 1880 when they occupied 15 N. Clinton St. In the Jan, 1881 edition of "The Railway Purchasing Agent" book (digitized by Google) they mentioned "700 miles of fence built by us last season" and "contracts taken for 20 miles and upwards". By 1888 they had expanded into 15, 17, 19 & 21 N. Clinton St. Shortly after the Great Chicago Fire, they moved into the brand new Rookery which was completed in 1888. Since the letter opener states that they have 10 years experience and now occupied 441 Rookery, this letter opener dates to somewhere between 1888 (Rookery opened) and 1890 (10 years after 1880) at the latest. These might have been distributed later during the Chicago World's Colombian Exposition in 1893 where they were an exhibitor, if not before.