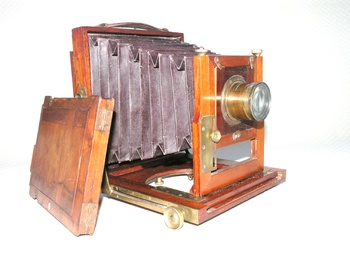 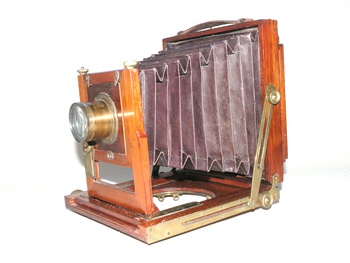 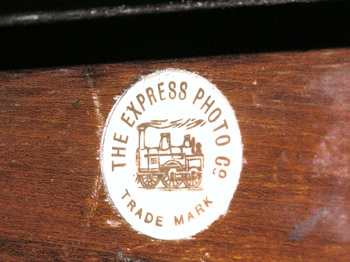 Express Photo. Company, The. | English Camera | 1906 | Half Plate.
The Express Photo. Company was a Coventry-based business founded and run by Ernest Ratledge, born 1880 into the family of J. Ratledge and Sons, professional photographers in Sheffield. A photograph by this firm, of a location in Sheffield, exists in Sheffield City Archives, dated 1905, but by this date Ernest himself had his own photographic business in Boston, Lincolnshire. By 1906, based in Rugby, he set up The Express Photo. Co., to record now invaluable historic images of townscapes, streets, buildings and scenes rapidly becoming industrialised in Coventry and surrounding Warwickshire. For this project, The Express Photo Co. made or commissioned a small number of cameras, badged with the Company's steam locomotive trade mark logo. This is one of them. It is stamped number 43, but this could be a maker's mark rather than a serial number and it is unclear how many were made. Fairly cheaply built, but of professional standard, with rising front, swing and tilt back and the ability to use wide-angle lenses, it is worth collecting for its history, since it is believed that with these cameras, at least 400 different views were commercially published from within the old Coventry city boundary. Ernest Ratledge subsequently worked itinerantly in various parts of Britain, using local retailers to distribute his cards, and after the First World War he settled in Halton, Bedfordshire.