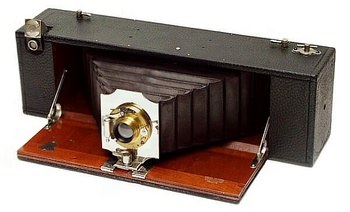 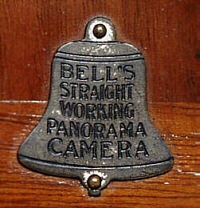 This is really cool as far as panoramic cameras go (for those who like this kind of stuff) and quite scarce. It is historically important as the first roll film camera to make panoramic pictures without spinning lenses, curved film backs, rotating tripod mounted bodies, and other gimmicks - hence the term "Straight Working" in the name.

The camera is also more elaborate than it appears. Hidden within the body is a clever yet simple duel format feature for making full-sized 11 inch wide panoramas or 5½ inch postcard sized images. A pair of levers mounted on the body rotates velvet cloth masks into the film plane to reduce the image size. For standard panoramas, the masks are rotated out from the film plane to the inner bellows wall.

And it's a camera I now regret selling many years ago.