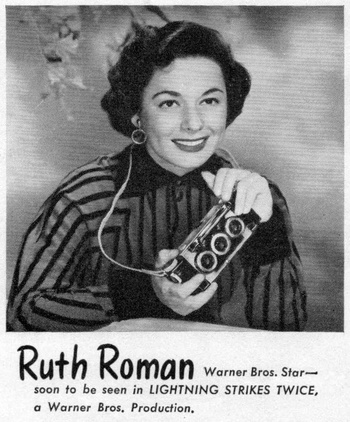 This is a 1951 black & white print advertisement for Realist Stereo Cameras featuring American film and television actress Ruth Roman; - noted as soon to be seen in "Lightnng Strikes Twice", a Warner Bros. Production
- The actual advertisement size is 3 1/2" wide by 10" high - circa 1951
** http://en.wikipedia.org/wiki/Ruth_Roman
*** The Stereo Realist is a stereo camera that was manufactured by the David White Company from 1947 to 1971. It was the most popular 35mm stereo camera ever manufactured and started the era of stereo photography for the masses that continued even after it was no longer manufactured.