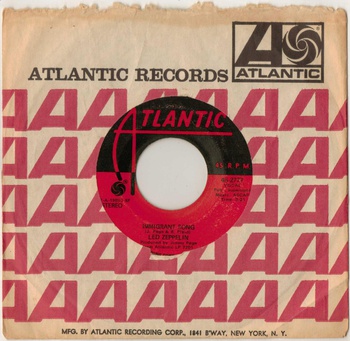 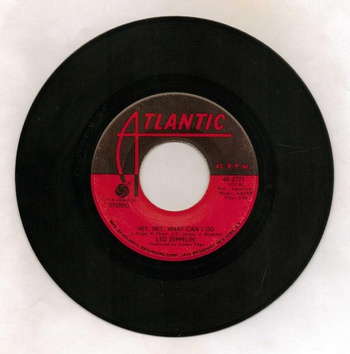 This is a 45rpm released in 1970 by Atlantic Records of "Led Zeppelin"
(1970) - Atlantic Records #45-2777 - (in Atlantic Records sleeve)
- Side A - "Immigrant Song" / - Side B - "Hey, Hey, What Can I Do"
*** Led Zeppelin were an English rock band formed in London in 1968. The group consisted of guitarist Jimmy Page, singer Robert Plant, bassist and keyboardist John Paul Jones, and drummer John Bonham. The band's heavy, guitar-driven sound, rooted in blues and psychedelia on their early albums, has earned them recognition as one of the progenitors of heavy metal, though their unique style drew from a wide variety of influences, including folk music. After changing their name from the New Yardbirds, Led Zeppelin signed a deal with Atlantic Records that afforded them considerable artistic freedom. Although the group was initially unpopular with critics, they achieved significant commercial success with albums such as Led Zeppelin (1969), Led Zeppelin II (1969), Led Zeppelin III (1970), their untitled fourth album (1971), Houses of the Holy (1973), and Physical Graffiti (1975). The group disbanded following Bonham's death from alcohol-related asphyxia in 1980. The band was inducted into the Rock and Roll Hall of Fame in 1995.