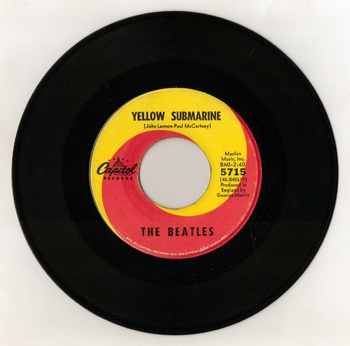 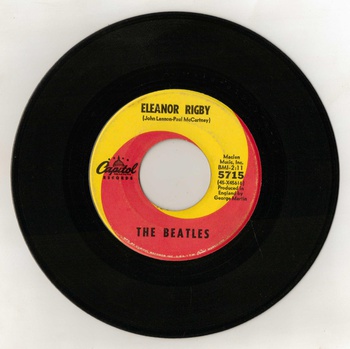 - 45 rpm record released in August, 1966 by Capitol Records
- "The Beatles" / Capitol #5715 (1966) - plain white sleeve (not color sleeve)
- Side A - "Yellow Submarine" / - Side B - "Eleanor Rigby"
** Yellow Submarine, written by Paul McCartney (credited to Lennon–McCartney), with lead vocals by Ringo Starr. The single went to number 1 on every major British chart, remained at number 1 for four weeks and charted for 13 weeks. In the U.S., the song peaked at number 2 on the Billboard Hot 100 chart and became the most successful Beatles song to feature Ringo Starr as lead vocalist.
** Eleanor Rigby was written by Paul McCartney, and credited to Lennon–McCartney.
It did not fare so well, spending four weeks at number one on the British charts, but in America it only reached the eleventh spot.