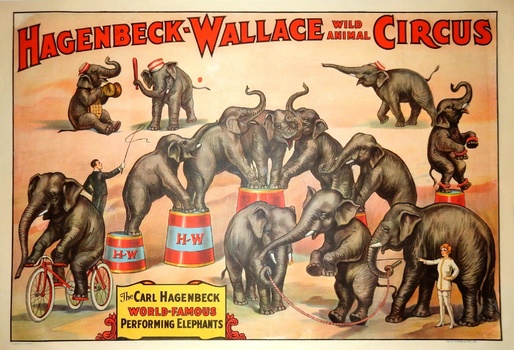 German animal importer and showman Carl Hagenbeck was a sensation when he brought his trained animals to the Columbian Exposition in Chicago in 1893. He was so successful that when the World's Fair closed, he continued presenting his animals along with other acts as the Carl Hagenbeck Circus traveling the length and breadth of the United States.

In 1907, an unscrupulous circus-owner named Ben Wallace purchased the show from Carl Hagenbeck and began using the Hagenbeck name, and even his portrait in the new show's advertising. Whether it was Wallace's reputation, or another reason, Hagenbeck sued to prevent the use of his name and image. Hagenbeck lost that suit, and one of the great titles in circus history was launched. Hagenbeck died in 1913, but his name and image continued to be used on the circus for the next 25 years.

This particular one-sheet (42"x28) was printed by Erie Litho and Ptg in Erie, Pennsylvania in the early 1930s, long after Hagenbeck was dead - yet it promotes the "World Famous" Carl Hagenbeck elephants. This lithograph was used for several seasons in the early-to-mid 1930s.

In 1929 John Ringling acquired the Hagenbeck-Wallace Circus as part of the purchase of the American Circus Corporation. It continued to be managed by the Ringling interests through 1935, when the title was expanded to Hagenbeck-Wallace Forepaugh-Sells Circus. At that time Hagenbeck Wallace was the second-largest circus in the United States, only behind co-owned Ringling Bros and Barnum & Bailey. The title was leased to showman Howard Bary for the 1937 and 1938 seasons after which it never traveled again.