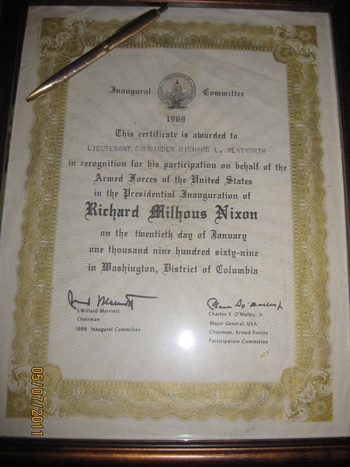 I inherited a Nixon inaugural committee certificate from my Grandfather that served in the Navy. I believe he spoke on behalf of the entire navy to the president or he spoke on behalf of the entire navy to the man who spoke to the president (sorry for the lack or terminology.) Regardless, Lieut. Commander Richard L. Wentworth was an important part of the Navy that was also in charge of the entire Bethesda Naval Hospital. He was later promoted to Captain where he received his gold leaf in Hospital Administration and then promoted to Admiral where he declined and chose to retire. I believe there are pictures of my Grandfather with Nixon and I will have to do some further researching to find them. Not only do I have a certificate from the 1969 inaugural committee but I have one of the pens that Nixon used to sign in his inauguration. I was wondering what the value of these items would be. Thanks so much!