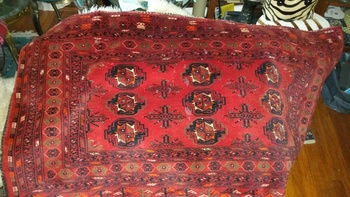 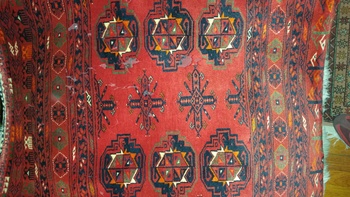 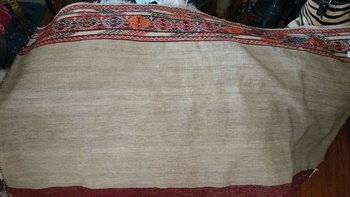 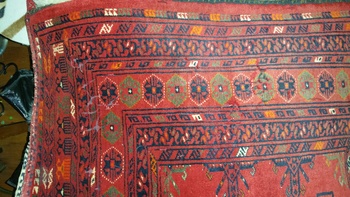 Approximately 15 years ago, I came upon an individual who was in possession of several examples of Persian textiles, including carpets, small rugs, camel bags, storage bags and wall hangings.
Upon making the purchase, I discovered that they were of a variety; from Pakistan, Iran, Iraq and Turkey to name a few.
I was told that they were original and from the mid 19th to the 20th century.
The item I choose to display, a storage bag, measuring about 5 ft long x 3 ft high.

It appears to be an example of Turkenstien weaving. It is tightly woven, ie 300 knots per inch, with original natural dyes. The back is is not woven as fine as the front.
This item was made by a nomadic tribe that migrated throughout the middle east.

This fine example of Turkmen weaving, does not necessarily come from Turkenstien.
They come from other locations where Turkmen live such as Iran, Afghanistan, Turkey and Syria.
They can also come from anywhere in Turkestán (Central Asia, plus Xinjiang in Western China), particularly West Turkestán.
According to bukhara-carpets.com, West Turkestán is an area of 700,000 square kilometers with the Caspian Sea to the west, the mangyshlak Peninsula to the northeast and the Kapet-Dagh Mountains and the outskirts of the Hindukush forming a semicircle to the south.
Many different ethnic groups has occupied this region for millennia and among those associated with the weaving, in addition to Turkman's themselves are the Ubeks, Karakalpas and the Kyrgyz.

The history, the way of life and the beliefs of the Turkman steppe people are all of great importance to their arts.
Turkman rugs, therefore, with their distinctI've palattes, motifs and camposirions, are not merely examples of strange and or exotic folk art, but represents a highly complexes and strong historically continuous culture. The strong historical continuity was made possible by innate conservatism of Western and Central Asian tribal culture's and most importantlyby their nomadic and semi-nomadic way of life.
The Turkmans are devided into tribes, the number of which now is hard to estimate.
The tribes themselves are further devided into kinship groups and individual families, much like large tribal confederations in Iran, many of which are also wholly or in part of Turkic orgin. The Turkman family live in distinctive tents called yurt, which could be erected and dismantled within a.few hours. Their principle source of wealth were wool which provided by sheep, horses, camels, milk and on occasions meat. The task of overlooking the flocks and weaving were done strictly by women. 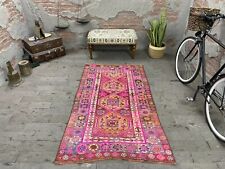 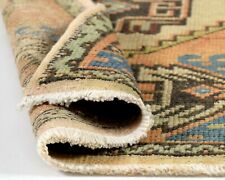