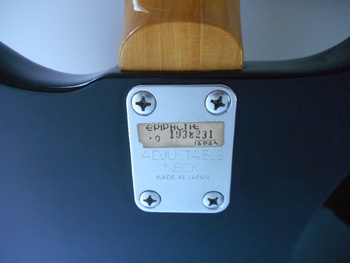 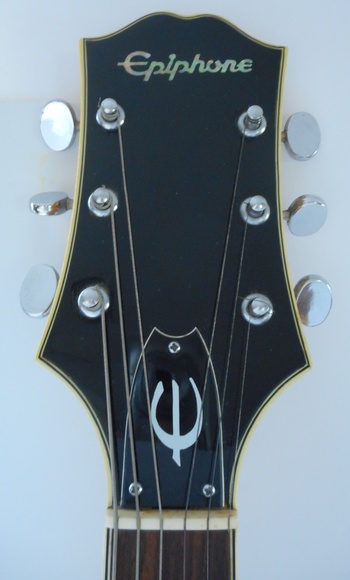 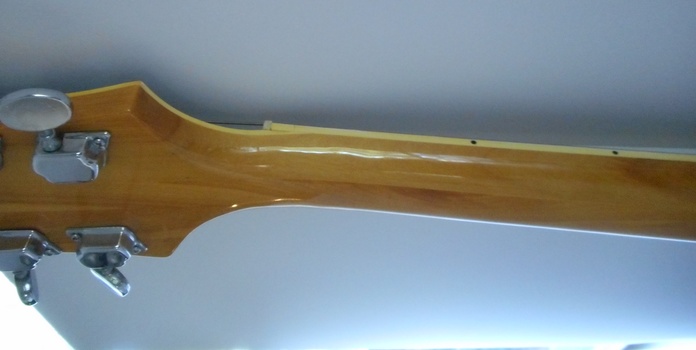 Here is another estate sale find, one that I do not think I can bring myself to part with. I have always loved Epiphone guitars as the working class equivalent, or at least approximation, of a Gibson. Most collectors would probably agree when American guitar manufacturers began outsourcing production to foreign factories in the 1960s and 1970s, the earliest of these, Made in Japan models, were the highest quality. The theory is that the early adopters were not only sending their designs overseas, but initially some of their American machining, equipment, parts, and presumably even some luthiers and American technicians.

While some of that might be wishful thinking, the going wisdom is the electric guitar quality hierarchy goes: America>>Japan>>Korea>>Mexico>>China. You can take an American-made Fender Stratocaster right out of the retail box, tune it, and it should have incredible action and tone, with proper intonation. With a Japanese or Korean model, and even a better Mexican instrument, a savvy amateur guitar tech can generally tweak the truss rod and bridge settings, and end up with a professionally viable instrument. Lots of touring and independent artists are playing Mexican-made guitars these days. In my opinion, a Chinese Fender, at this point, is probably always going to play and sound third-rate, in a comparison test.

This beauty was among an estate sale put on by one of those professional estate liquidators who will use the home of a primary estate, and stage it with the leftovers from dozens of previous estate sales or the spoils of their other picking. It is also the perfect example of a poorly advertised sale, in the sense that the photo that brought it to my attention was stuck several rows down on their listing, like an afterthought, way past contemporary decorative and household items of lesser value.

I was so aggravated with Google maps when I passed the street for this sale and went fifteen minutes out of my way before realizing I should have just trusted to day glow signs I had seen (Incidentally, if I was not using an Android phone, I would be using an alternative, and am open to suggestions). I was convinced someone else would have snatched it by the time I got there. I bee-lined for where this piece could be in the mishmosh of stuff, like switching on vintage guitar radar. It was piles of kids toys and clothes as far as the eye could see, until finally, she appeared, neglected, in a corner. The only other things of significant vintage value I saw in this particular sale were choice rare Star Wars toys, all carefully tagged, centrally displayed near the register for $30 and up. I am so out of touch with the variations in value on those, I could never even take my chances. Plus, storing them seems like a nightmare to me. Guitars are like paintings, line them up, upright in the closet, or decorate the room with them! They are precious toys to me. I paid $65 plus tax for this. I even tried to haggle first. For some reason, I have never had any shame about negotiating over price on guitars, but the proprietor of the sale was not having it. I gladly paid his price, in the end, without even testing it, after gleaning what little bit of provenance info on it I could.

Anyway, I mainly shared this to point out the discrepancies you will find online about many models. If you scour the web, you will see sellers calling this a 1970s Wilshire, a 1990s Crestwood, a Crestwood ET-290, an ET-278, and an ET-276. If you read this serial number as "103823," one serial number database says it was made for Epiphone by Samick, in Korea, in 1991. But the neck plate and the label both say Made in Japan! This is one of those areas where I still trust reference books more than I do the internet. I have a great Guitar Identification book by A.R. Duchossoir, for American models by Gibson, Fender, Gretsch, and Martin. Unfortunately, that does include Epiphone.

So, I welcome any input on this from other collectors. Some sources indicate a Matsumoku, Japan Wilshire reissue was produced only for the Japanese domestic market from 1975 to 1979. Others indicate a Crestwood ET-278 was made in Japan with this neck and headstock binding from 1972 to 1975. My best guess is, if this serial number could be traced to Korea, perhaps it was a situation where new old stock of Japanese parts was being assembled in Korea at the later date of the 1990s reissues. Do any of you guitar aficionados out there know of any history of that type thing happening?