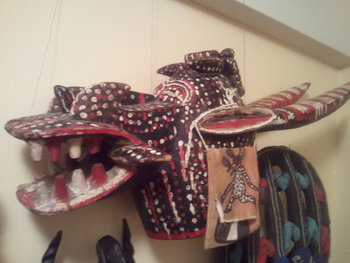 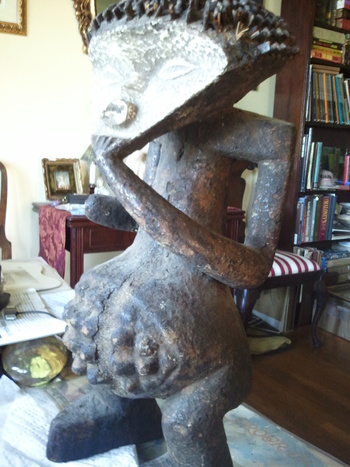 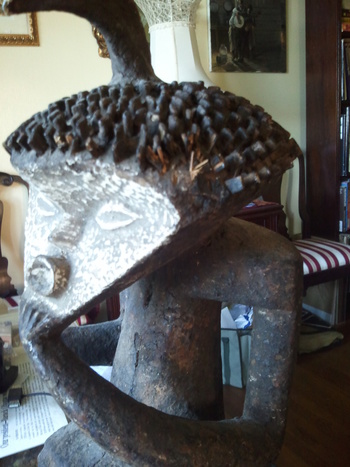 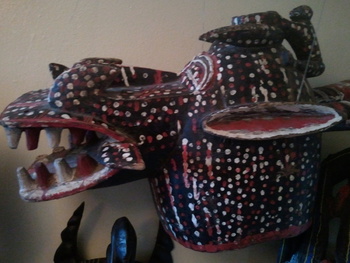 The sculptures in the Grassland regions of Cameroon, often royal effigies and or representatives of the various chiefs. The Mambila, on the frontier of Cameroon-Nigeria, believe that spirits of the ancestors must intercede to secure the well-being for the living. The figure shown, known to be the "EFFIGY" of a male ancestor, is said to be full of intensity, vigor and concentrated. It is a fine expression of a vision of the ancestor seen as simultaneously benevolent and malevolent. Offerings were essential to appease it. I acquired this item during my travels in West Africa. It appears to be circa earlier 20th century. According to in formation received, the items was passed on by his family elders. It has great patina and shows age.

The mask, given to me by an elder of the SENUFO tribe, is called wanyugo mask. The wanyugo mask of the type is considered especially potent and aggressive. It is commonly called "fire spitter". I personally witness a performance where the dancer blew sparks of fire from the mark during a ceremony. This mask was was kept in a small hut, located outside of the village in front of a scared grove known as a sinzaga. The helmet mask, painted black, red and white; has beautiful patina.
The tribal beliefs is that there are three moments in African life. There are three stages in particular as related to these beliefs: fertility rites, initiation unto adulthood and funerals. This mask, seen at funeral endings, is marking the end of human life and continuation of the ancestral link. The mask is composed of threaten features: jaws bristling with large teeth, long protruding horns with a chameleon holding on to a cup atop the head. materials alleged to give the mask strength and evil powers was put into his cup. A magical obgect, it was used by small associations of men attached to the Poro.