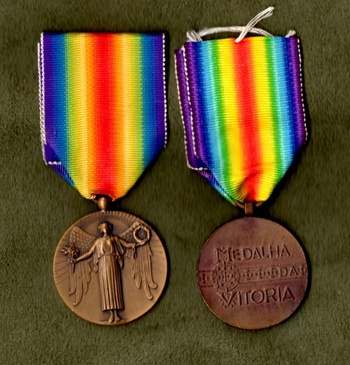 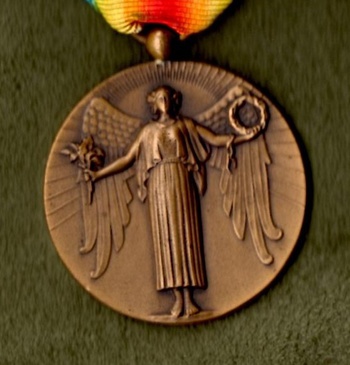 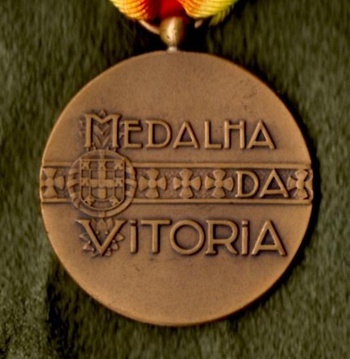 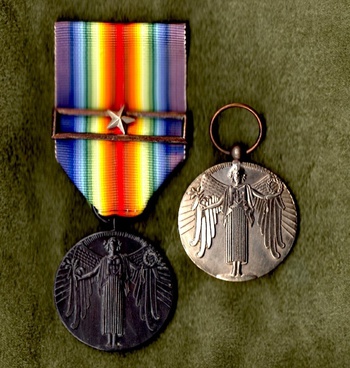 Portugal entered the war when it seized 72 German merchant ships that were in Portuguese harbors at the start of the war, at the request of Great Britain. Germany responded by declaring war on Portugal. Portugal had to defend against German attacks on her colonies, Angola and Mozambique. It also fielded a corps of about 40,000 men in France, most notably defending against the German Lys offensive in April 1918.

This Victory Medal was designed by Joao da Silva, a renowned Portuguese sculptor of the era. Here I think winged Victory has a modernist look. Instead of “The Great War for Civilization,” this medal simply reads “MEDALHA DA VITORIA” or “Victory Medal”, and also omits the names of the allied nations. Approximately 100,000 of these medals were issued.

The medal to the left in the first photo and in the second and third photos appears to be an official issue. I say “appears” because the detail on the row of war crosses on back in photo three and the way they crowd into the outside edge of the medal doesn’t seem quite right to me. If it’s not original, it’s a pretty good copy. The one on the right in the first photo is a contemporary unofficial version produced by Casa Buttuller of Lisbon, identifiable by the narrow cylinder instead of a ball suspension, as well as differences in detail. The ribbons should be laced through a decorative bronze buckle, common to Portuguese medals of the time. Unfortunately, both these ribbons are replacements. In the last picture is a cheap reproduction, but it shows how the buckle should look. The star in the middle of the buckle indicates the recipient served in combat. The medal beside it is a mystery to me. It’s got beautiful crisp detail, but its silver instead of bronze!

Nations that produced Victory Medals that are not (yet) in my collection:

Philippines: approx. 6,000 issued. Although the Philippine Constabulary seized and interned 22 German ships, the US War Department denied them the US Victory Medal (The Philippines then being a US possession), so they created their own.

Siam: approx. 1,500 issued. When Siam (Thailand) entered the war, its primary objective was to gain international recognition as a fellow sovereign nation. The Siamese Expeditionary Force totaled 1,200 troops and fought in Europe.