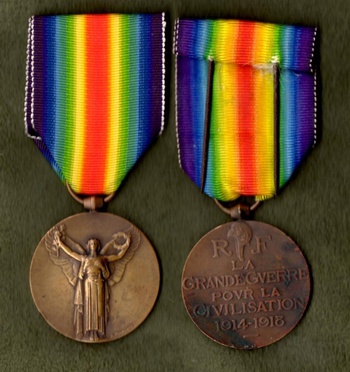 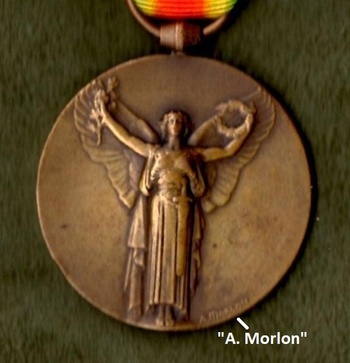 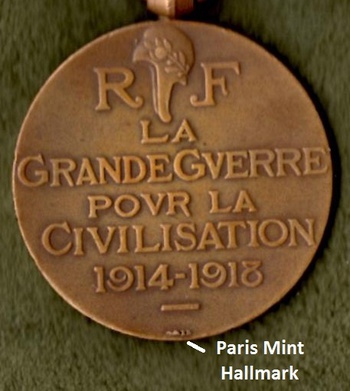 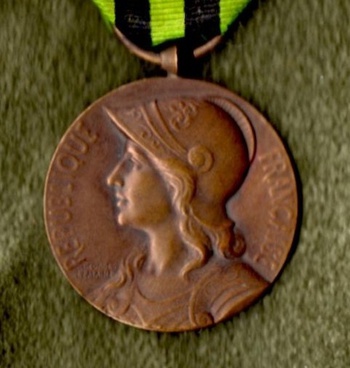 On 1 August 1914, Germany Declared war on Russia. France mobilized in accordance with their treaty, and on 3 August, France and Germany declared war on each other. And so it began. World War I cost France 1,357,800 dead and 4,266,000 wounded. Over a half million were made prisoner or missing. France had 40 million citizens at the start of the war; one source reports that six in ten men between the ages of eighteen and twenty-eight were killed or permanently maimed. And to think that was the winning side.

Although all eligible veterans were authorized to wear the Victory Medal, each recipient had to procure his own medal from the Paris Mint or a commercial firm. In addition to commercial sales, it’s likely that many discharged veterans didn’t bother to purchase a medal. Approximately two million official issue Victory Medals were provided by the Paris Mint. The designer, Alexandre Morlon, was chosen after a national competition that was restricted to artists who had also been combatants during the war. The competition’s uncertainty and delays meant the official versions were not minted until 1923. Some manufacturers went ahead of time and produced variations by other artists with alternate reverse sides, including medals in silver, medals with blank backs, and medals using the Cuban and Belgian versions of the winged victory.

Shown in the first photo are two official issues of the French Victory medal, showing front and back, to include the two prong attachment. In the second photo, besides the winged Victory, the front has “A. Morlon” near her feet. In the third photo, the back of the medal features a Liberty Cap and RF (Republique Francaise). Below that “La Grande Guerre pour la Civilisation” (“The Great War for Civilization” with the aesthetic twist of substituting “V” for “U”) and the war dates. France was among the nations that ignored the requirement to list its allies on the back of their Victory Medal. At the very bottom of the medal is a tiny blob that is supposed to be a cornucopia, the hallmark of the Paris Mint. Next to it are the letters BR, indicating the bronze content of the medal.

Part of the resolution by the Victory Medal Commission was that its color, thickness and ring for suspension would be similar to that of the French campaign medal of 1870-71. The fourth photo is that campaign medal. Only France, Siam and the U.S. have a suspension device that looks like it. The colors of the other victory medals range from brassy gold to reddish bronze.

Another requirement of the victory medal was that it be 36mm in diameter. The Brazilian and French medals are 35mm; The Belgian, Rumanian and Greek medals are all over 36mm. Seems like nobody could follow directions!